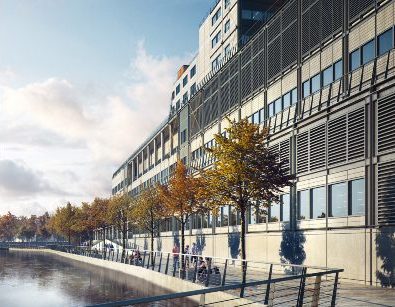 A £2 million charity campaign to raise funds for a West Midlands super hospital which will enhance the patient journey has been launched.

Cash raised will be used to fund research nurses, pharmacists and community spaces at the Midland Metropolitan University Hospital, which will be run by Sandwell and West Birmingham NHS Trust (SWBH).

The state-of-the-art facility will open in 2022 and boast the biggest Accident and Emergency department in Europe, serving 700,000 people across Sandwell and West Birmingham.

The campaign, called We Are Metropolitan, was launched this week by Your Trust Charity, the registered charity of SWBH.

Richard Samuda, Chairman at SWBH, said: “Besides our drive to ensure MMUH delivers the best care possible for our patients, our charitable appeal for funding enables the Trust to develop in parallel, important community outreach activities and research relevant to our patients. We see this as key to making this more than a hospital build project and to contribute to wider improvement in public health outcomes.

“There will also be an arts and culture programme, which will be supported not just through exhibits, but through summer concerts, plays, stage shows and other examples of the performing arts put on by schools and amateur groups.”

Mr Samuda added: “The thinking behind the We Are Metropolitan campaign is to reflect the fact that everyone within Sandwell and West Birmingham is part of this hospital, which is not just about caring for our community, but also including them.”

The local community and businesses across the region are being encouraged to support the campaign by donating to the fund by hosting events. Thrill seekers can even take part in a bungee jump on site in September.

Paul Faulkner, Chief Executive of the Greater Birmingham Chamber of Commerce, is also Co-Chair for the campaign’s Business Committee.

He said: “I am delighted to support this worthwhile campaign and would encourage the business community to get involved. The scale, ambition and impact of the hospital will be truly transformational for our region. We are already over half way there – but we need the help of our local community to get to £2 million by 2022. We want to make it more than a hospital, but that can only be achieved if we raise these vital funds.”

To help with the fundraising campaign contact Your Trust Charity on 0121 507 5196 or email midlandmet@nhs.net. Donations can be made online at https://donorbox.org/your-trust-charity.