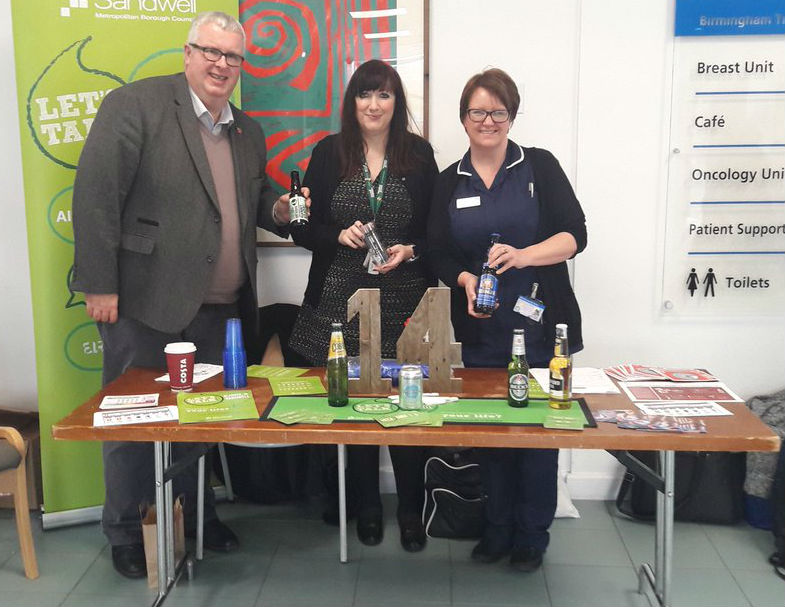 Alcohol abuse in Sandwell and Birmingham costs the NHS a staggering £72.1 million a year, new figures have revealed.

And around 300 patients are being seen every month at Sandwell and West Birmingham Hospitals NHS Trust (SWBH) suffering from some form of alcohol abuse. The shocking statistics were released by the Trust during Alcohol Awareness Week.

Arlene Copland, Lead Alcohol Specialist Nurse from SWBH, said: “We see a startling number of patients coming into our emergency departments who need help to control their alcohol intake.

“But what they don’t realise is drinking too much can lead to a number of serious health problems, such as liver disease, cancer, fertility issue, stomach ulcers, raised blood pressure, stroke and dementia.

“It’s important that everyone knows what their limits are. National guidelines recommend that both males and females do not drink more than 14 units per week.

“We work closely with local charities Swanswell and Change Grow and Live (CGL) to reduce admission to hospital due to alcohol abuse and provide support in outpatient settings. We are helping patients to reduce their intake or stop drinking alcohol completely.”

The theme for this year’s Alcohol Awareness Week centres around encouraging people to think about how drinking can also affect their family. SWBH is working with Swanswell and CGL to organise a number of activities at Sandwell and City Hospitals to raise awareness among patients, visitors and staff.

Arlene added: “During this week, we have organised drinks tasting where people can try non-alcoholic cider and wine.  There will also be a short quiz and visitors will be able to try on special beer goggles which give the same visual effect as when a person is drunk.

“We hope that the activities will make people realise that having control of how much you drink can make a large impact on your life and your loved ones’.”

Annie Steele, Swanswell Director, said: “Alcohol misuse can affect anyone and people may not even realise that they’re drinking to potentially harmful levels. Alcohol Awareness Week is a great opportunity to stop and think about your own alcohol use and how it can affect your family. If you’ve got any questions, speak to organisations like Swanswell who can help.”

Sian Warmer, Head of Service at CGL, added:  “Working together with SWBH, we are raising awareness of the impact alcohol addiction can have on an individual and their family. Anyone, regardless of age or social background can lose control of their drinking. It’s important that people recognise the warning signs of slipping into dependency. Our message is clear: if you are worried about how alcohol affects you or a loved one, it’s never too early or late to seek support, take back control and change, grow and live.”