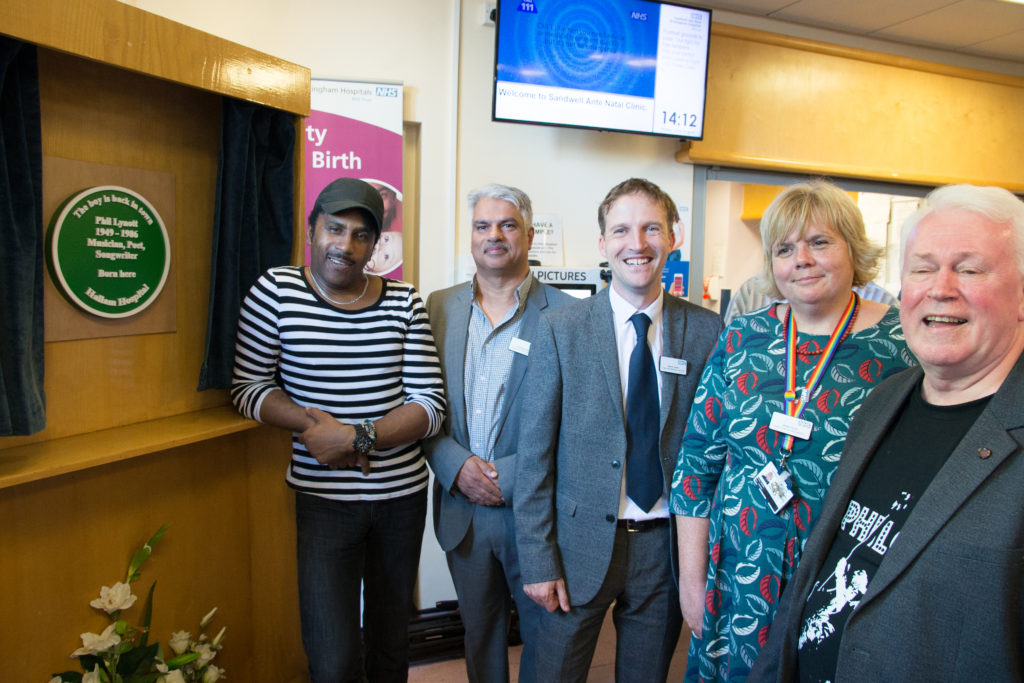 More than 50 fans from across the globe turned up at a West Bromwich hospital today (Friday 23 August) to watch the unveiling of a tribute to rock star Phil Lynott in the form of an emerald green plaque.

The plaque inscribed with the words “The boy is back in town. Phil Lynott 1949-1986. Musician, Poet, Songwriter. Born here Hallam Hospital” will be fitted at the entrance to the Antenatal Clinic.

Sadly his mother Philomena, who was delighted to learn that the hospital intended to honour him, died on 6 June this year. Money for the plaque has been raised by the local community and singer H, along with writer Sean Meaney who spearheaded the campaign.

Phil’s daughters, Sarah and Cathleen said ahead of the ceremony: “It is particularly poignant timing that his place of birth is being honoured in what would have been his 70th birthday year. “There was obviously something in the water at that time as Robert Plant was born on the same day in the same town a year earlier. We are really proud of all our dad achieved and are so grateful for this recognition and to everyone who keeps his memory alive.”
Fans from Japan, Sweden, Scotland and Spain came to see the unveiling along with Trust staff and others who cheered when the tribute was unveiled. 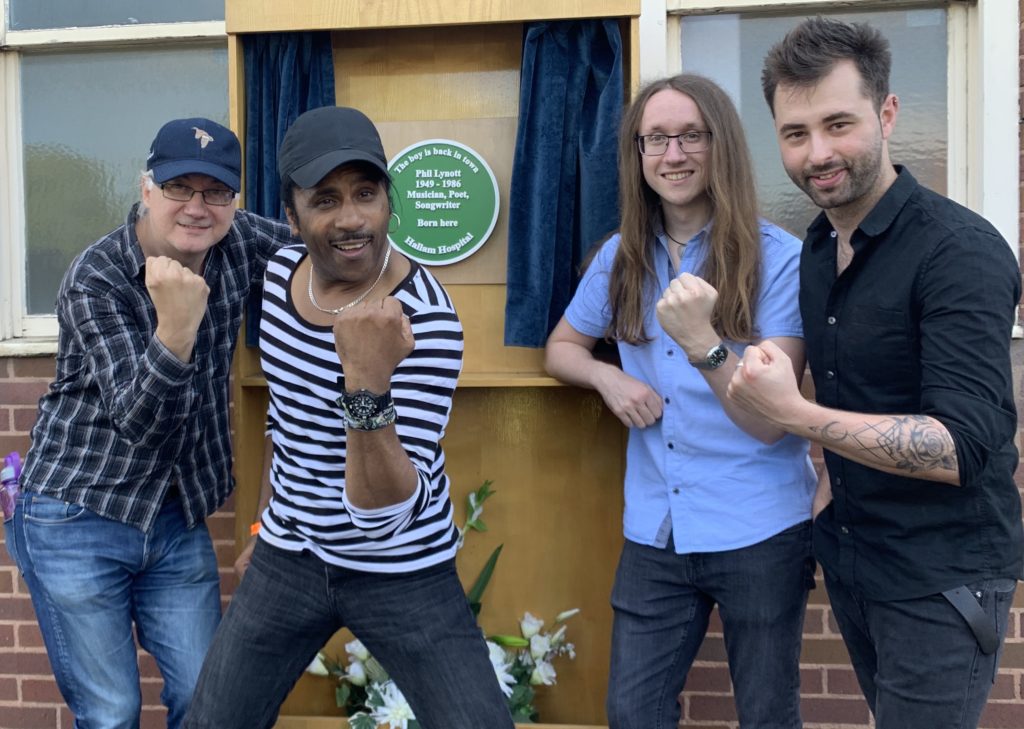 H, who unveiled the plaque, and the rest of tribute band Dizzy Lizzy.

Helen Hurst, Director of Midwifery from Sandwell and West Birmingham NHS Trust which runs Sandwell Hospital, said: “It is very fitting that a plaque to honour Phil Lynott is here at his birth place. He was extremely talented and we are proud to be associated with Phil, who made a huge difference to the lives of so many through his music. It is fantastic to know that Sandwell Hospital was the place of birth to one of the most iconic singers from the 70s and 80s.”

Phil, who died aged 36, lived in Smethwick for a short time with his mother Philomena before she moved to Manchester. She finally returned with him to her native Ireland, where he spent the rest of his upbringing before he went on to form Thin Lizzy

Sean, who was also at the event, added: “We lost Phil far too soon and it is sad that his mother wasn’t able to see this day.

“Despite her failing health, the devoted 88-year-old had told friends it was her dream to travel back to West Bromwich one final time to see her late rock star son honoured in the place of his birth. She was very emotional and felt that life had now come full circle.

“She sadly passed away just 10 weeks before the ceremony was due to take place. It has left us all shocked and tinged with sadness.”

Guess who got a plaque today? We’re celebrating the life of Thin Lizzy’s Phil Lynott with a tribute to go on the wall at the hospital (Sandwell) he was born at. #thinlizzy #phillynott #birmingham #theboysarebackintown #rock #music #rockmusic #sandwell #emeraldgreen #ireland