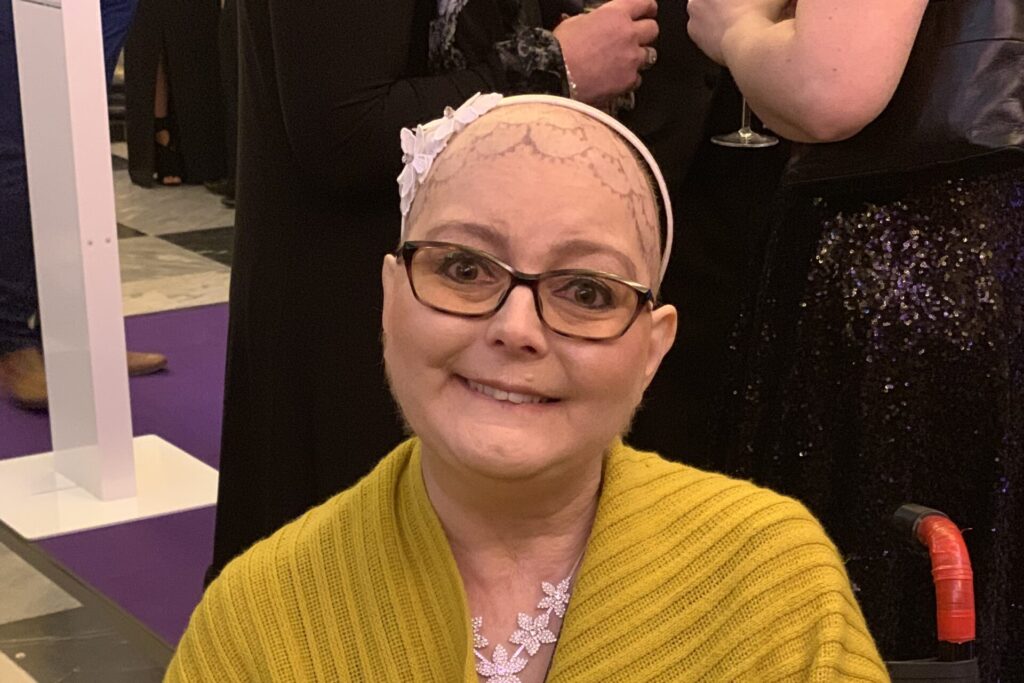 It is with great sadness that the Trust announces the passing of Sally Gutteridge, a great supporter of Your Trust Charity, who raised more than £6,000 over the years for the organisation.

Mum-of-two Sally, a former patient at the Trust, worked closely with Amanda Winwood, Fundraising Manager for Your Trust Charity, over the years. 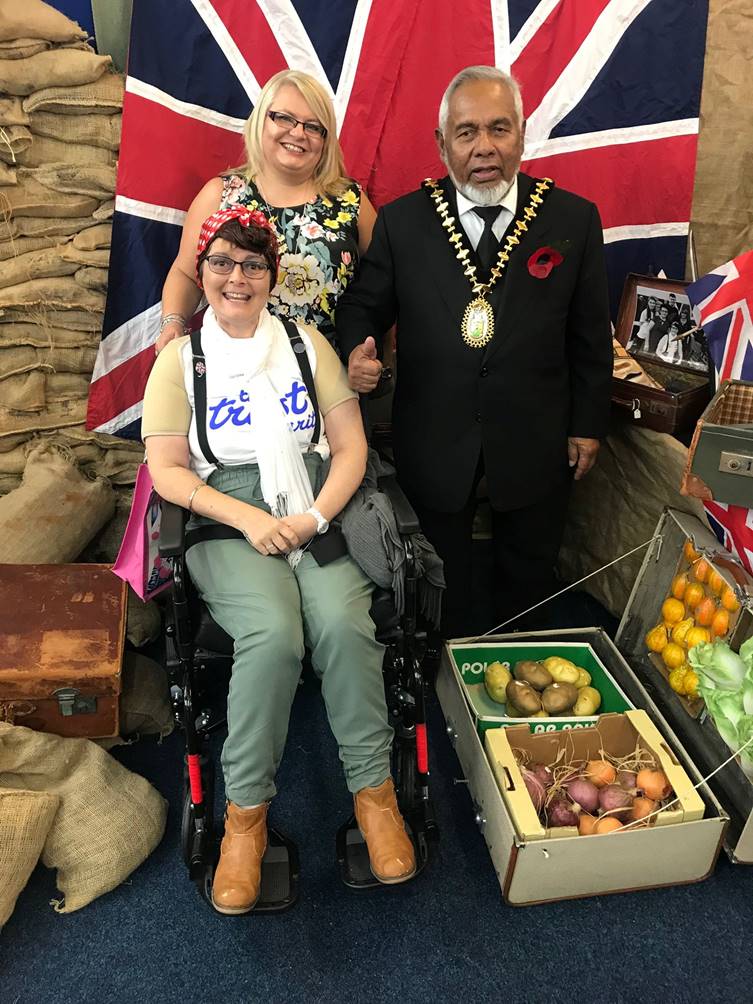 Sally Gutteridge (front) at the 1940s event with Amanda Winwood (back left) and Coun Haque, former Mayor of Sandwell.

Amanda said: “Sally was such an inspiration to so many people and touched so many lives.  I met Sally back in 2016 when she approached the charity as she wanted to make a difference to other patients starting their chemotherapy journey at the Trust.  From our first encounter she was such an inspiration, a mum of two, battling cancer and undergoing gruelling treatment, yet she was so positive, you could not help but love her.

“We set to work and created Sally’s Sunshine Packs, Shine A Little Light on You. The design was Sally’s idea as she loved sunflowers and we wanted to incorporate her name in the project.

“Sally’s Sunshine Packs included items like puzzle books, hand cream, crayons and boiled sweets.  We have had so much positive feedback from patients receiving the bags.”

Amanda added: “Her work with Your Trust Charity didn’t stop there. Sally loved to bake and bring the community together. She held bake sales at the local library and decided to go one step further and hold a 1940s tea party at Brook Street Centre.  She rallied her own army of helpers who prepared prizes, sold tickets, made sandwiches and cakes and made the day a huge success. The Dynamics Choir and Dancers were in attendance and we even managed to get the backing of the Mayor of Sandwell Councillor Haque, who supported Sally’s projects and as a result named Your Trust Charity as one of his chosen charities of the year.  She had prizes for the best dressed 1940s costume and made myself and the Mayor judge it. The room was buzzing and it was all because of Sally.  She raised over £1,500 at this event alone.” 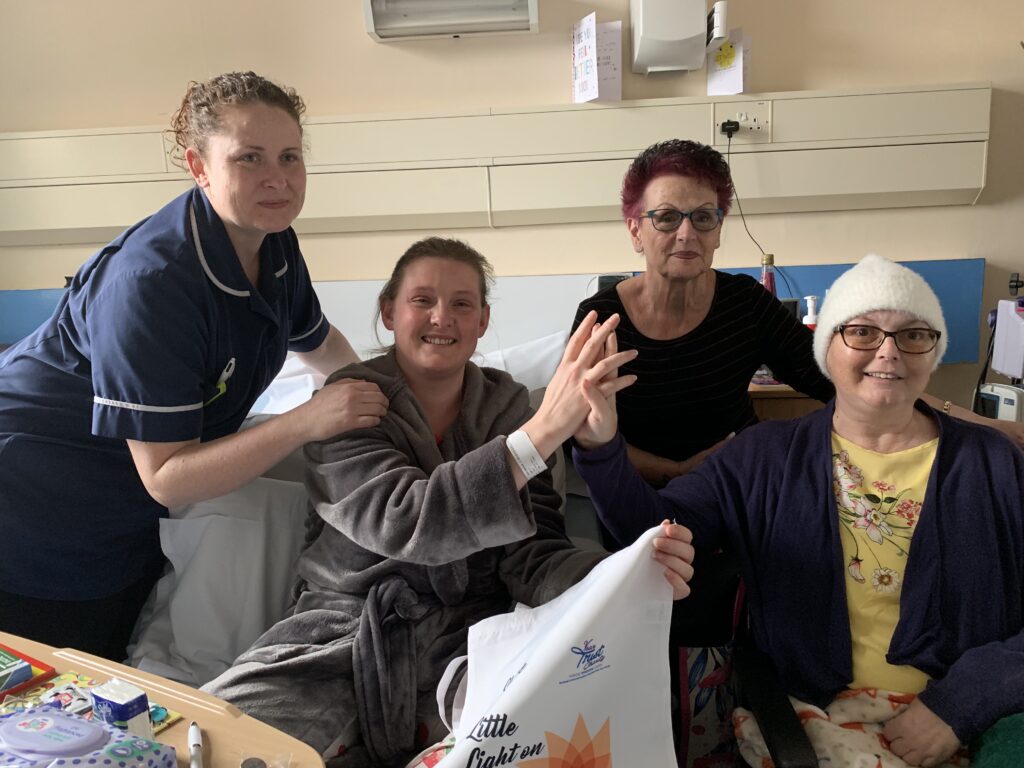 Sally continued with her bake sales and in 2019, Amanda nominated her for the Aston Villa Foundation’s Community Most Valuable player.  Sally won the prize and was also recognised in the Trust’s annual Star Awards, scooping Fundraiser of the Year.

Sally’s fame didn’t stop there. Your Trust Charity nominated her for a Pride of Birmingham Award in 2019.

Amanda added: “Judges were so impressed with her dedication that she won Fundraiser of the Year – and she was elated that she got to sit next to the news presenter Bob Warman for the evening.

“In her words, she ‘talked his ear off’. The celebrities at the event knew she was amazing, with Chris Tarrant commenting that she was an extraordinary woman whilst Alan Titchmarsh told her we needed more people like her.

“Along the way Sally received fundraising support from 33 keen cyclists who were past and present members of staff at the Trust. They wanted to back her fantastic work which really made a difference.  They organised a special event for the team as it was their 20th anniversary since they were established. They set the target of £2,000 but raised an amazing £4,250 which will now help Sally’s legacy live on at the Trust and as we move to the Midland Metropolitan University Hospital.

“Since Sally’s fundraising for Your Trust Charity began, she battled a number of illnesses and suffered a stroke, but that didn’t dampen her commitment to helping others – if anything it made her more determined.  She held a Grease themed event, with a drive-in movie, complete with American diner decorations and food. Funds raised went into Your Trust Charity.

“Sally raised over £6,000 herself, which is amazing considering she was in and out of hospital as she battled cancer.

“Sally was a friend and someone who will stay with me for a long time. The impact she has had on so many is tremendous.  We need more Sallys to make a difference. She carried out the mission of Your Trust Charity and enhanced the journey for all using service at the Trust, staff, patients and their families.  Your Trust Charity will be forever grateful to everything Sally has done for the organisation.

“Sally was ridiculously happy in life, always upbeat, cheeky and thinking about the next event, so let us celebrate her life and keep her legacy going! I’m so proud to have known Sally and her  family. She will be missed.”