YOU may have a very high pain threshold, but that doesn’t mean you can afford to ignore chest pain which is only getting worse.

So Lakhvinder Kaur discovered only this week, on the eve of the 67th anniversary of the creation of the NHS. For the 47 year old has suffered from heartburn for many years and has a very high pain threshold. When her chest felt a bit tight at work she ignored the pain and finished her shift, despite the advice of colleagues.

Concerned work mates at Matalan, where she works as a Sales Assistant, pointed out to her that she looked pale and should go home and rest. “I was doing a long shift, 1pm until 9pm, and when my co-workers saw that I didn’t look well they suggested that I needed to go home and rest, but I didn’t want to do that.

“I did give my shift the next day to one of my co-workers, as it was only a shorter shift, so that I could spend the next day relaxing,” Lakhvinder said.

After a restless night due to the pain, which continued to build, she took her son to school and called her doctor. “I was told that the doctor wasn’t in so I told the receptionist what my problem was and they told me to go to A&E. I then drove to the hospital and the pain continued to increase to the point that I had tears running down my face by the time I got to A&E at Sandwell Hospital.”

In an obvious amount of pain, Lakhvinder told the receptionist what her issue was and the hospital staff worked quickly due to the nature of her condition. 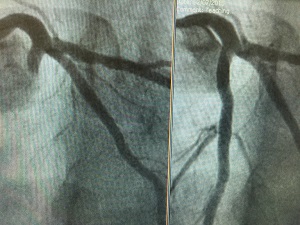 “I was monitored immediately and taken directly upstairs by Cardiologist, Dr Connolly, to the Catheter Laboratory in the Coronary Care Unit (CCU) where they started their procedure. My main artery had closed, I was having a heart attack.”

Within 15 minutes, her blocked artery was opened and the pain was relieved.

Dr Derek Connolly, Consultant Interventional cardiologist, who performed the potentially lifesaving coronary angioplasty and stenting, said “People often assume they are not at risk of heart attacks and that their pain is simply indigestion.

“In this case Laky was lucky that she came to hospital. She drove herself here but we prefer patients call 999 and come in by ambulance as the paramedics know exactly where to take you.”

It has been documented that heart disease is five times more likely to occur in women of South Asian descent than the general population. Experts aren’t sure why this is the case, but it may be linked to diet, lifestyle and different ways of storing fat in the body.

In many cases, they mistake the pain for indigestion or heartburn, just like what happened with Lakhvinder. It is suggested that people should not drive themselves to A&E for treatment as there have been recorded cases of people suffering cardiac arrest on the way to the hospital.

“I am used to feeling pain due to my history with heartburn, but this felt different, I could feel the pain in my back and slightly in my arm,” Lakhvinder said.

After her traumatic experience, Lakhvinder was very happy to talk about the service she had received while under the care of the NHS. “The staff have been excellent since I got here, they have helped me whenever I have need them. I have fainted a few times while I have been on the ward and after I blacked out on a chair by the time I had come back around, I was on the bed.”

Lakhvinder commented: “I would like to thank the NHS for caring for me so well, and potentially saving my life. It is with my heartfelt gratitude that I wish everyone a Happy NHS 67th birthday.”