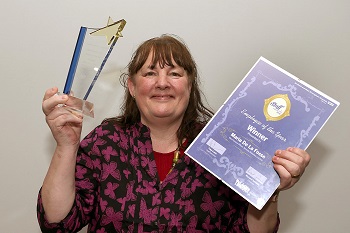 More than 300 employees from Sandwell, City and Rowley Regis Hospitals and teams who work in community health services were honoured at a Staff Awards Ceremony.

The awards held at Aston Villa Football Club on Friday 17th October, recognised excellence and highlighted the contribution individuals and teams are making to improve patient care in 13 categories.

The Oncology Unit team scooped the Excellence in Care Award, which is voted for by patients, visitors, carers and members of the public. The team regularly receives praise from patients for the excellent care and compassion it gives to every individual, with many believing they receive ‘world leading care’ from them.  Runners-up were FINCH team, nominated by eight patients and  Mrs Effie Katerinaki, Consultant Plastic Surgeon, nominated by two patients and two carers.

Winner of the Employee of the Year Award was Maria de la Fosse, Ward Service Officer at City Hospital’s Serenity Midwifery Led Unit. Maria is described as an individual who goes above and beyond her role on a daily basis with colleague and nominator Ashley Pedersen adding that Maria is “the kindest and most caring member of staff” that she has ever met.

Receiving the Clinical Team of the Year Award was the Acute Medical Unit at City Hospital, which is the busiest department in the hospital.  Following a period of significant change, the Unit has maintained a willing attitude and continues to deliver the highest standard of care with great morale and enthusiasm.

Taking the title for Non Clinical Team of the Year was the Medical Records Clinical Prep Team at City Hospital.  This group supplies patient medical records for various departments across the hospital.  It is said that nothing is too much trouble for this team which always goes the extra mile to deliver excellent service at all times.

Lifting the trophy for Staff and Patient Engagement were two joint winners in the form of the Cancer Services Team and Natalie Reeves, Discharge Co-ordinator on ward Priory 5 at Sandwell Hospital.

The Cancer Services Team has been proactive in providing support to cancer patients and their families, holding Wellbeing events since 2011 that now attract more than 300 visitors.  The Team’s initiatives empower patients and help them to combat the disease.

Natalie Reeves is regarded as an invaluable asset to Priory 5 and has a wealth of knowledge regarding community services and facilitates effective discharges each and every day.

This year’s Patient Experience Award went to Mandy Burns, Clinical Lead in Sandwell’s District Nursing Team, who is praised by her colleagues for having a genuine passion for patient care, reassuring her patients and making them feel like they truly matter.  She responds promptly to messages and will always try to squeeze in an extra visit here and there.

The winner of the Patient Safety Award was Diane Rhoden, Adult Safeguarding Lead Nurse.  Since taking the role in 2008, Diane has implemented a successful programme to raise awareness among staff and the public about patient safety, as well as developing processes to enhance the safety of vulnerable adults.

In recognition of his loyalty and hard work as the Deputy Director of Facilities, Steve Clarke collected a Lifetime Achievement award, sponsored by Wing Yip.  His unassuming manner means most people are unaware of his significant and outstanding contribution to service delivery and patient care across the Trust for many years.

Picking up the New Leader Award, sponsored by Hay Group, was Justine Irish, a Matron on the Medically Fit for Discharge wards.  Her colleagues say that Justine leads by example and demonstrates excellent leadership, ensuring that patients who are medically fit go on to receive exemplary care in a safe environment.

The winner of the Outstanding Leadership Award, also sponsored by Hay Group, went to Des Conlon, Deputy Lead Practitioner in Windmill Theatres.  With a 25 year career at the Trust, Des has helped theatre departments overcome many periods of change.  In that time he has maintained a positive approach and happily listens to any issues raised by colleagues.

Winners of the Transformation Award was the Diabetes Team, which since 2013, has provided every General Practice with its own Diabetes Community Care Extension (DiCE) team, comprising a diabetes specialist, a diabetes specialist nurse and their administrative support. The team has also started virtual consultations using Skype or Facetime, which have proved popular with patients as well as freeing up outpatient capacity.

The Clinical Effectiveness Award was presented to Sister Julie Edwards, Clinical Nurse Specialist in Headache who has been the linchpin of the Birmingham Headache Service for the last 10 years. Her work has resulted in a reduction in headache waiting times. Recently the team was invited to present its results at the launch of the All Party Parliamentary Group on Headache’s report at Westminster, which gave national recognition to Julie’s achievements.

The judges couldn’t choose an outright winner for the Innovation Award, so it went to both Justin Drew and Denise Charnock who are coincidentally, both Speech and Language therapists for the Children’s Therapy Service.

Justin has developed a new approach that can help children who find it challenging to express their ideas verbally, to communicate better. His simple but effective approach has boosted children’s confidence and independence in literacy and is now available in a Windows-friendly version that can be used widely by parents and schools.

Denise has a strong belief that every child has the capability to triumph over bodily limitations and acquire knowledge about the daily activities they experience. She has developed an idea which uses touch cues to communicate with children and young people who have profound and complex learning difficulties and who may also be visually or hearing impaired.

The Trust’s Occupational Health and Wellbeing Service and the Children’s Therapies Team were also awarded trophies at the ceremony after being awarded ‘Beacon Status’ – for demonstrating not only that they are excellent at what they do but that they provide a scope of service beyond that of their peers; are developing a reputation for innovation at national or international levels and are a place from which others can learn and have a culture of continuous improvement.

SWBH Chief Executive Toby Lewis said: “The NHS is a remarkable organisation.  What makes it remarkable are the people who work within it – their compassion, resilience and teamwork.  It was particularly pleasing to have more nominations than ever before for the people demonstrating these strengths who we are fortunate enough to count among our workforce.

“These awards are a small thank you for big achievements and they are also a chance for patients to show their appreciation for the care they have received in our Trust.  Their views of what we do matter to us very much.

“More than 300 of our highest achieving employees were at the awards on Friday and it was a privilege, alongside the Deputy Mayor of Birmingham and Mayor of Sandwell, to be able to celebrate their service and their very many successes.”