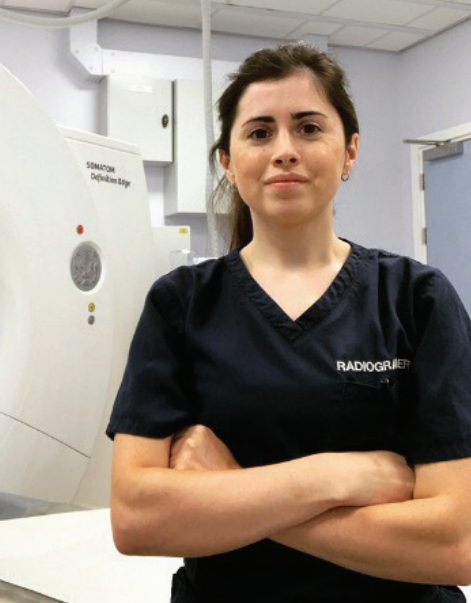 They’re the Commonwealth Health heroes – giving up their precious time to support Birmingham as the major sporting event arrives in the city.

A total of 11 staff from Sandwell and West Birmingham NHS Trust are taking part – from volunteering their medical skills to treat athletes and spectators to performing on stage for the many ceremonies that will take place.

Aoife Murphy, senior CT and MRI radiographer, will be combining her two passions – medicine and sport when she volunteers her time.

But she’s also an All-Ireland and All-England medal holder in the Irish stick and ball game Camogie.

She said: “There is a real thrill and excitement of being part of an historic sporting event right on my doorstep. The Commonwealth Games will be the biggest sporting event in the UK for a decade and the largest ever held in the West Midlands.

“I will work as part of the Commonwealth Collective which includes medical volunteers. We will be essential to supporting world class athletes perform at their best during the games, and I’ll be providing high quality imaging services throughout at one of the three polyclinics equipped with MRI, ultrasound and X-ray facilities. Working alongside highly experienced sports medicine clinicians many of whom have worked at the highest levels in team and international sport, I’m looking forward to gaining new skills and meeting new people, all while making a real difference to the athletes and supporting this historic local event.” 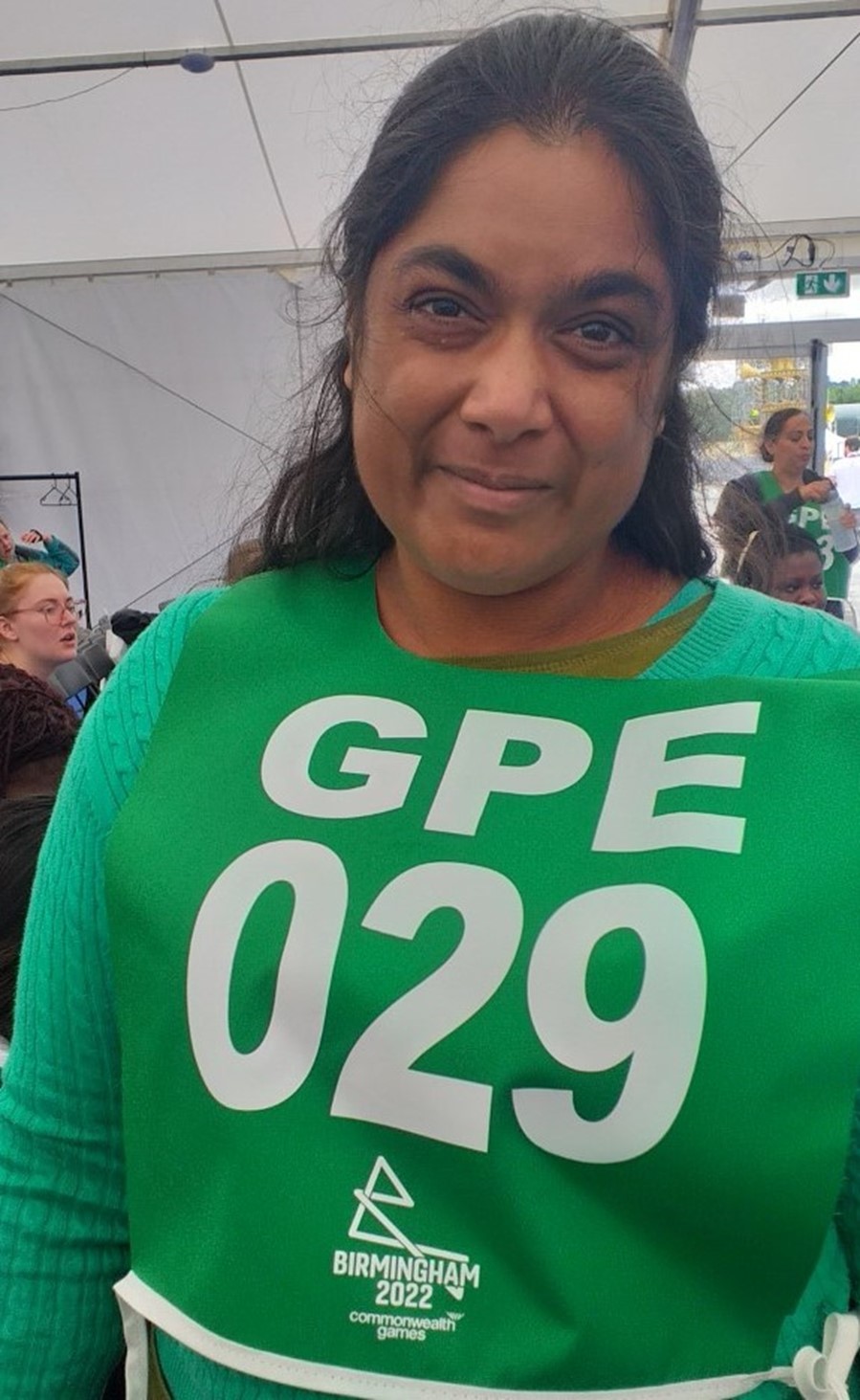 Prinith will be taking part in the closing ceremony of the Commonwealth Games.

Leaving her day job behind will be Prinith de Alwis Jayasinghe, a paediatric dietitian. It’s been her dream to take part in a sporting opening or closing ceremony – and finally she gets to do just that. The dietitian will be dancing alongside Duran Duran in the closing ceremony taking place on Monday 8 August. She’s keeping her exact routine under wraps – but is excited at the prospect of finally taking part. She said: “I’m not really interested in sport, but I absolutely love the ceremonies. I had considered auditioning for the London 2012 ceremonies but realised I wouldn’t be able to attend rehearsals, so I’m thrilled to be taking part this time.”

Other staff taking part include baton bearer Dr Sarb Clare, a leading acute medicine consultant, buyer Theresa Hickey, who’ll be greeting spectators at various events, Rebecca Burt, a respiratory clinical nurse specialist who will perform a dance on stage during the opening ceremony, and Ellie Patel, an intensive care nurse who will act as a first responder team leader – ensuring any audience members falling ill are given immediate care.

Below is the full list of SWB NHS Trust volunteers, with a short summary of their role and a quote.

As well as being awarded an MBE in 2020 for her services to health during COVID-19, Dr Sarb Clare has been selected as a baton bearer and will take part on 27th July, at the Botanical Gardens. She joins a list of inspirational individuals that make up the 2,000-strong relay team.  Dr Sarb said: “I am extremely proud and honoured to be representing Birmingham during the games. To have family and friends cheering me through the leg of the relay, combined with Olympian blood from ancestors, should make for an incredibly special occasion.”

Theresa will be playing a key role in the management of experience for the spectators. As ‘Umpire Chair’ for the events services, her role is to create a long-lasting impression on spectators through her front of house and departure work.  After already completing five hours of training and a little more to do, Theresa has learned that the role will require high-energy and proactiveness. She hopes she “has enough energy to provide a good service to promote our lovely Birmingham at its best”.

Alongside working as a Respiratory Clinical Nurse Specialist, Rebecca Burt has been rehearsing twice a week for the past month, perfecting routines for the opening and closing ceremonies.

As part of the opening ceremony, Rebecca will be a part of a dance routine as a section of the performance. Fifty women will be portraying the chain makers of Cradley Heath and the Black Country, ‘showcasing a part of their story.’ In addition, she will be a marshal for the closing ceremony, dancing whilst athletes are paraded around the stadium. Rebecca beamed: “The Commonwealth Games coming to Birmingham is potentially a once in a lifetime event and being a part of it and the atmosphere is an opportunity that cannot be missed.

“I feel really honoured to be able to represent the history of the region and to help to tell these stories to the millions of people who may be watching over the world.”

As a proud Brummie and Midlander, Cheryl Newton jumped at the chance to volunteer for the Commonwealth Games, as an opportunity to “give something back” and “represent the Midlands as the friendly place it is”. Cheryl will be working as part of the transport team based at the University of Birmingham site. Keen to aid the cause, Cheryl has chosen to do something completely different to her day job to learn new skills.

Another staff member transferring his work from the Trust to the games is Martin Holmes. He will be volunteering as part of Team England, as a physiotherapist in the University of Birmingham polyclinic. No stranger to working within elite sport, Martin has previously volunteered at the Glasgow 2014 Commonwealth Games. This time around, his appointment is a “legacy” physiotherapist, supporting the development of fellow practitioners in preparation for future Team England projects and events.

Using her recruitment skills, Sarah Gibson has managed to successfully ensure a wealth of volunteers will take part in the event. Although not working during the games, she was an integral part of the pre-organisation by creating an efficient team of games time volunteers.  Sarah always told herself that if a large event such as the Commonwealth games were to be held in Birmingham, she would put herself forward, despite it being out of her comfort zone. And with her recruitment experience in the Trust, there was something she could offer. Not only this, but Sarah said she is now more confident in her role at the Trust. She said: “I’ve learned a lot from this experience having been exposed to the way another organisation goes about its recruitment processes. Meeting so many different people from all walks of life, all wanting to give up their time to be involved was inspiring.”

One of the most recognised periods during prestigious sporting events, are medal ceremonies. Rachael Falkner will be volunteering as part of the medal ceremony team, based at Arena Birmingham in the City Centre for gymnastics, and the University of Birmingham for the hockey.  The opportunity gave Rachel a chance to find out more about different sports and give something back. She said: “It might boost my self-confidence and learn some new skills. I haven’t done anything like this before and I’m looking forward to the experience.”

For Sarah Cooke, this is an opportunity of a lifetime. She has volunteered to be a part of the event services team this summer, appointed to meet and greet audiences for Netball games, held at the NEC Arena.  Sarah said: “It’s great to feel I will be a part of something in my hometown, and great to be doing my bit.”