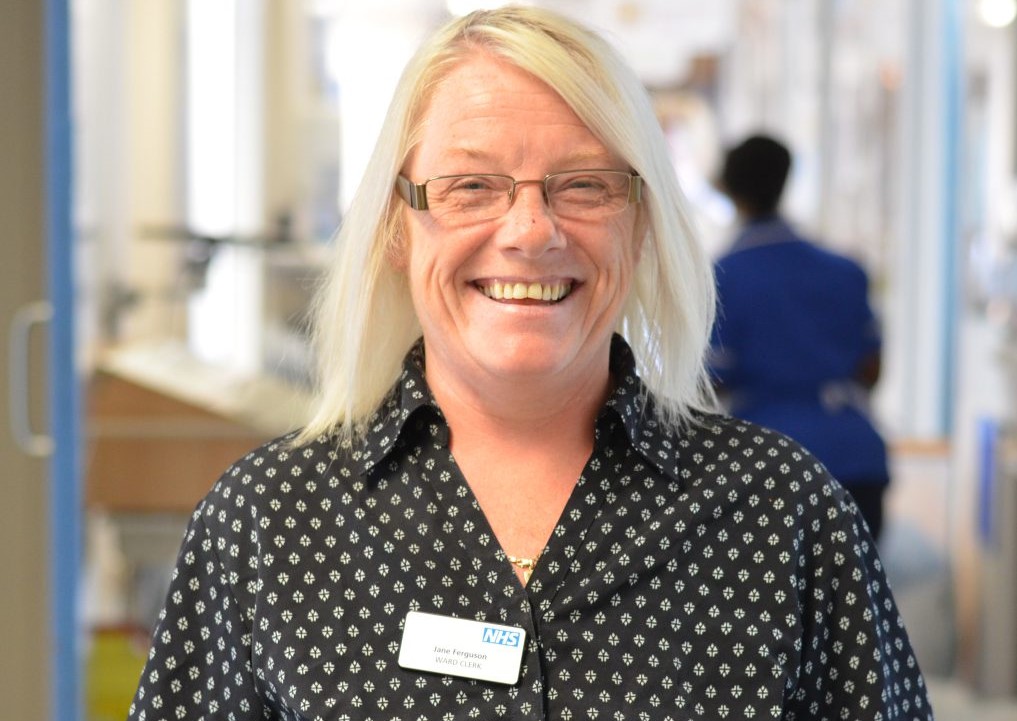 One of the great things about organisations like the NHS is there are lots of opportunities for staff to advance or to move into something different. A person’s career path is rarely restricted.

Today’s NHS Hero, Jane Ferguson has worked at Sandwell and West Birmingham NHS for nearly eighteen years and is currently a ward clerk, working on Lyndon 5 ward at Sandwell General Hospital. Her career has seen her work with both generations old and new: as whilst she is currently assisting elderly patients, before this she was working with children.

“I have worked for the Trust since 2002 and started off in administration, helping with internal audits before moving on to school screening as part of audiology,” explained Jane. “Essentially, we worked to detect any hearing loss with paediatrics, it was an interesting job which I did for 16 years. It was very fulfilling that I could play a part in helping children in this way.”

The 50-year-old from West Bromwich, has now switched generations to be a part of Lyndon 5, a medical mixed sex ward at Sandwell General Hospital which specialises in Gastroenterology and General Medicine and Jane has been a part of it since it was established two years ago.

“It was a great honour starting the ward as new and I took it as being a big challenge,” she said proudly. “Over the past two years I have learned an awful lot, guided by very experienced clinical staff, meeting and working with all colleagues on and off my ward based environment. The role I undertook was not only the clerical side of ‘just paperwork’ but as a friend and confidant where I enjoy in encouraging new staff members and being there for them in their new place of work.”

It’s been a lot of hard work these past two years but her efforts have seen her nominated as the Trust’s Star of the Week, which Jane ranks as a real career highlight. Jane was nominated for the award by her colleague Ward Sister Vikki Howard who wanted to recognise the Jane for her professionalism and ‘can do’ attitude as well as ongoing positive feedback from patients.

Professionally, Jane says that she is driven by the connection of working with not only staff on and off the ward but also being able to interact directly with patients, helping them with requests or those of their relatives and assisting her colleagues in ensuring a very active ward is run smoothly.

She added: “I love meeting people and most of all helping them in the best way I can. As you can imagine, there’s no atypical shift and everyone is different, but that’s what I enjoy and this role drives me to succeed in helping everyone to get the best result for the patients, relatives and our staff. It all adds up and means better results in our patient care and that is why we are all here.”

Although she notes her time in the health service has made her more wary of her own health: “I’d hate to become ill for any length of time – it’s something that scares me a bit if I’m honest. I need to be there for my family, plus I do like coming in to work!”

Jane likes to spend as much of her free time as possible with her husband of 28 years at the family home, to whom she says she is “devoted” and the pair will often take time away together when they can.

As for an inspiration of her own, Jane also doesn’t have to look very far as her daughter has just qualified as a teacher.

“My daughter is always educating me too and it helps encouraging me to pursue every aspect where I can learn,” she said. “I’m now nearly done on an apprenticeship leadership course, it’s taken a lot of dedication balancing job, coursework and home but I’ve pushed through and loved every minute of it.”