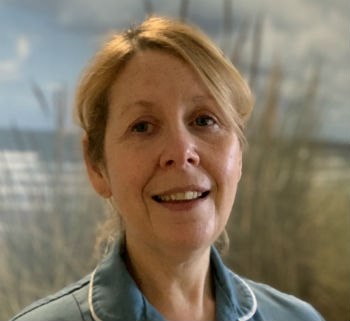 NHS Hero: Supergran! As Lynne keeps it in the family

It’s not often you help to deliver your own granddaughter at your work place.
But for Lynne Hewitt she did just that – and a month later she coached her other daughter through labour, who also went on to give birth at City Hospital where she is a Maternity Support Worker.
“It was all very surreal,” recalled Lynne, 53, who has worked at the hospital for eight years.
“I guessed both of my daughters were pregnant when we were out for a family party. I noticed they were drinking lemonade with orange juice so I asked them.
“They obviously couldn’t keep it a secret. I was very excited about it and of course I knew I would be part of the births because of the job I do.”
Daughter Becki, aged 33, was the first to give birth in November to Niamh at the Serenity Birthing Unit, which is based at the hospital.
“I was there throughout the labour and helped to deliver little Niamh. It was such a magical moment and a huge privilege,” explained Lynne.
“Laura gave birth to George a month later in the hospital’s labour ward. I was there throughout the labour until she was taken into theatre.
“It was so lovely to be there for my daughters during such an important time of their lives. And of course I was able to give them my guidance too.”
Lynne, from Bearwood, first began working in the maternity department eight years ago and joined Serenity two years later. Her job involves supporting midwives as they assist women in giving birth and making sure the environment is safe and clean for patients.
“It’s such an unpredictable job,” she said. “I could be helping to look after women who are postnatal, but then on other occasions I could be assisting with the birth. I work varied shifts too.
“I do love my job and knowing that I can give women the best care and support possible really drives me. I remember how different it was for me when I gave birth all those years ago and I want to make sure women have a good experience when they are in our care at City Hospital.”
So what would she describe as her next challenge?
“Every year women who give birth in February are asked to fill in a survey, which is run by the Care Quality Commission.
“It’s really important for new mums to take part, as this looks at how women are treated throughout their journey with us and how things can be improved. We want people from all cultures to take part in the survey, so we will be busy promoting this initiative.”
When Lynne isn’t working, she of course, enjoys spending time with her new grandchildren, and going on family holidays.
“I think I’ll be babysitting quite a lot over the next few years,” she laughed.
Who would she describe as her own hero? “My mum Winnie. She brought my brother and I up on her own and she always worked hard to make sure we didn’t go without. She’s definitely my role model.”