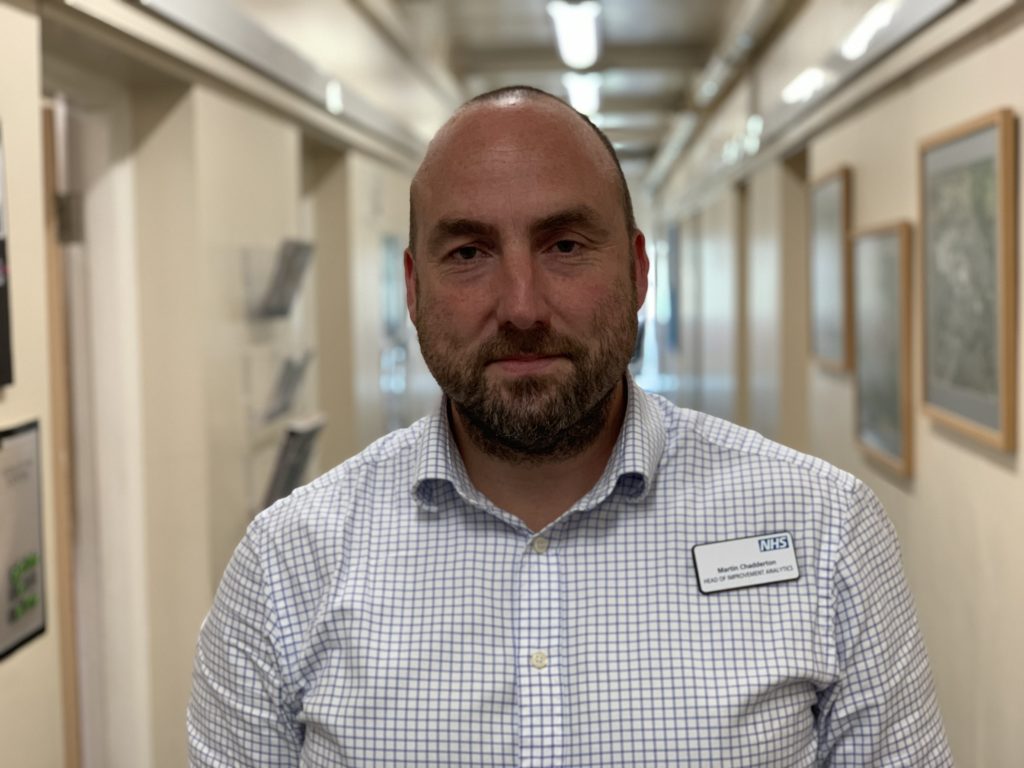 NHS Hero: Martin is always seeking improvements – it comes with the job!

When it comes to solving problems within healthcare – Martin Chadderton is certainly leading the way.

As Acting Head of the Improvement team at Sandwell and West Birmingham NHS Trust, he may not have direct contact with patients – but their care is at the forefront of everything he does.

And that is especially so when it comes to ensuring staff across the Trust focus on the organisation’s priority – patient safety and sepsis.

He’s been responsible for analysing the statistics around the Safety Plan – a programme that involves clinical staff completing 10 safety checks when assessing a patient within the first 24 hours of admission.

Since it was introduced the Trust has seen a reduction in the number of condition attributable falls and the project was shortlisted for a HSJ award.

“Improving patient outcomes is the most satisfying aspect of my career,” said Martin. “The problems to solve in healthcare are often more complex as they involve people’s health and no person is the same. I really enjoy the challenge.”

Martin’s work with analytics is renowned within the NHS – in 2017 he was appointed as one of the lead analysts in the Future Hospitals Programme, run by the Royal College of Physicians (RCP).

The Trust’s respiratory team was selected as one of four in the country to be part of the programme and delivered a pilot scheme where a one-stop shop was set up in a primary care centre – so patients were able to see a GP and a respiratory consultant at the same time if needed.

At the RCP’s annual Medicine Conference, Martin was invited to speak about how analytics could drive improvement across healthcare.

“I think you can do a lot more than just throw some numbers on a page to support patient care,” he explained. “You need to carefully listen and understand what people want to achieve and then think hard about how you can help. Data can be applied to finding root-causes to problems, measuring improvement, forecasting sustainability and predicting results. We can do better than just illustrating performance.

“I think speaking at the conference, alongside the work I did around Sepsis and patient safety have to be some of the highlights of my career here – as well as receiving the Innovation and Transformation award at the staff awards in 2012.

“But there’s still a lot more that I want to do.”

Martin has always been a numbers man. He started at City Hospital in 1993 as a computer programmer working within an IT team that employed just five people.

After leaving the hospital he went on to work within the manufacturing industry, and then he decided to up sticks and head for the United States.

He said: “I spent four years working in California, Astoria and New York, programming and implementing production line fault prediction software that is still in use today.

“But home was calling and I returned to the Trust in 2002 and have remained here ever since. I’m very proud of the team I lead and very conscious of the opportunity it affords in seeing the end results of improvement.”

Martin’s family is very important to him, he’s a dad of two boys and enjoys spending time with them. He added: “I don’t have one specific hero, but you see them every day and are often not found where you expect them to be.”