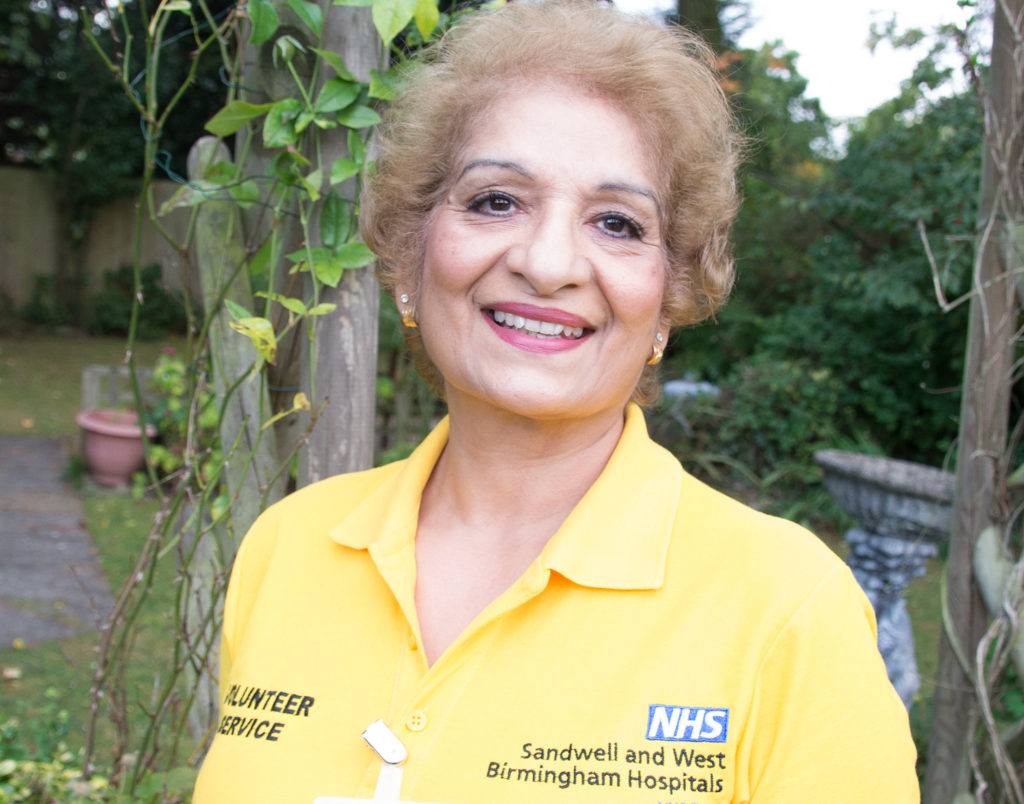 NHS Hero: From ‘Bra Doctor’ to a different kind of support for NHS volunteer Amrit

A  mum-of-three has gone from being a well-respected seller of lingerie to one of Sandwell and West Birmingham NHS Trust’s most valued volunteers for her work at Rowley Regis Hospital.

With the Trust celebrating Volunteers Week, where it gives thanks to those members of the public who offer their time and support to help the NHS, in turn this week’s NHS Hero focuses on the work of 67-year-old Amrit Varma.

Amrit, from Walsall, has been volunteering at the Heart of Sandwell Day Hospice for two-and-a-half years, something that began from a very personal connection – that being her father.

“I used to look after my Dad who was in and out of hospital quite a lot. As a result I noticed that there were a lot of patients that didn’t really have friends or relatives visiting them a lot of the time. Many just used to lie there and as a result they’d sometimes miss out on that extra company. It used to make me so sad. There wasn’t a constant pair of eyes on them checking, like there was for my Dad with me. So, I began to keep an eye on others offering more direct help there.”

When her father passed away, Amrit decided that she wanted to continue acting as support for those in palliative care and contacted the Trust’s Volunteer service. She quickly found her presence was extremely beneficial to patients, as not only did they have an extra person to interact with but her presence provided an additional degree of routine.

A normal shift for Amrit involves interacting with patients, making sure they are refreshed, helping to support them with their exercises and daily health tasks throughout the day. She also supports the nurses in their efforts to bring comfort. As someone with a close-up view of the health service in action, the grandmum-of-six is very complimentary about the nurses she has come across.

“All the nurses there are really, really good. These nurses give everything – they’re relentlessly working hard to look after their patients.”

Volunteering is actually not Amrit’s first brush with assisting the NHS, as she has previously helped in a surprising way – which earned her an even more surprising nickname.

“I used to work in social services in Walsall, but one day I was given the opportunity to set up a small business in a unit where we would sell underwear.

“The community we served only ever needed two or three specific larger sizes, but they really struggled to get hold of something that wasn’t a bit ‘fuddy-duddy’.

“In time we had people coming from all over the place because I was able to tell what type of bra style and size would suit people on sight – I got the nickname the ‘bra doctor’. “

But Amrit also worked with the NHS hospitals from around the region and helped provide bras for maternity and mastectomy patients, assisting with fittings and sourcing bras for them. (“It was great to be able to do that.”)

Now of course Amrit helps offer a different kind of support with her volunteer role, but she herself has someone she can always rely upon. Her hero is rather nearer to home than most, that being her husband Surinder, also known as Steve.

“He is selfless in his actions, has always done his best to help any member of the family and has always supported me 100 per cent in anything I’ve wished to do, no matter how hard those tasks have been,” added Amrit. “He is the kindest man I’ve ever known. I’m so very lucky to have met him.“