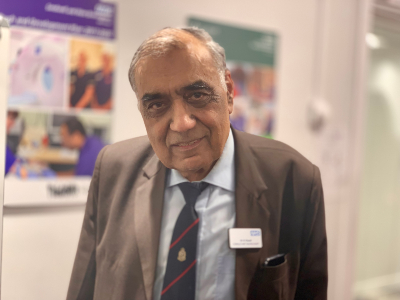 NHS Hero Dr Chand is inspiration for generations to come

Humble, talented and philanthropic – every once in a while you have the pleasure of meeting the kind of person that you know makes the world a better place. Consultant Radiologist, Dr Deep Chand is one such person.

Dr Chand had a distinguished career that spanned four decades, starting his career in the NHS in 1977 as a registrar. Finally in 1982, he joined Sandwell and West Birmingham NHS Trust as a consultant radiologist where he has been ever since.

During his career, he pioneered CT scanning and was pivotal in the introduction of ultrasound, MRI scanning and nuclear medicine as a whole. Outside of working at the Trust, Dr Chand had an equally impressive career. He joined the Territorial Army (TA) as a private soldier and rose through the ranks to become a lieutenant colonel.

He said: “I joined the TA at 43-years-old with my registrar and radiographers. Together we created a radiology department in the 202 Field Hospital, Birmingham.”

Dr Chand served in both Gulf wars. During the latter, he ran a 200-bed military hospital over six months in Basra. Working on the frontline Dr Chand and his colleagues provided life-saving care by introducing the use of ultrasound. This helped with the diagnosis and management of battle casualties.

He remarked: “I had the opportunity to serve Her Majesty the Queen, country and mankind during my deployment in the first Gulf War. The team and I not only supported our soldiers, but we created another ward for local children and females to help save lives.”

Dr Chand has received several awards recognising his outstanding career and for his service to queen and country. These awards include being admitted into the Order of St. John, the Territorial Decoration award for long service, as well as being appointed as a Fellow of the Royal Society of Medicine.

As if this wasn’t enough, Dr Chand supports several charitable works. He dedicates his time to many medical and humanitarian projects in deprived areas. One such project includes establishing a home and school for children in India.

During his spare time, Dr Chand likes to spend time with his family and gardening. But he also enjoys travelling to India, where he visits the school he has helped to fund. He’s also working on his autobiography.  He added: “I’d like to inspire the younger generation from underprivileged backgrounds to have progressive careers as I have been able to.”