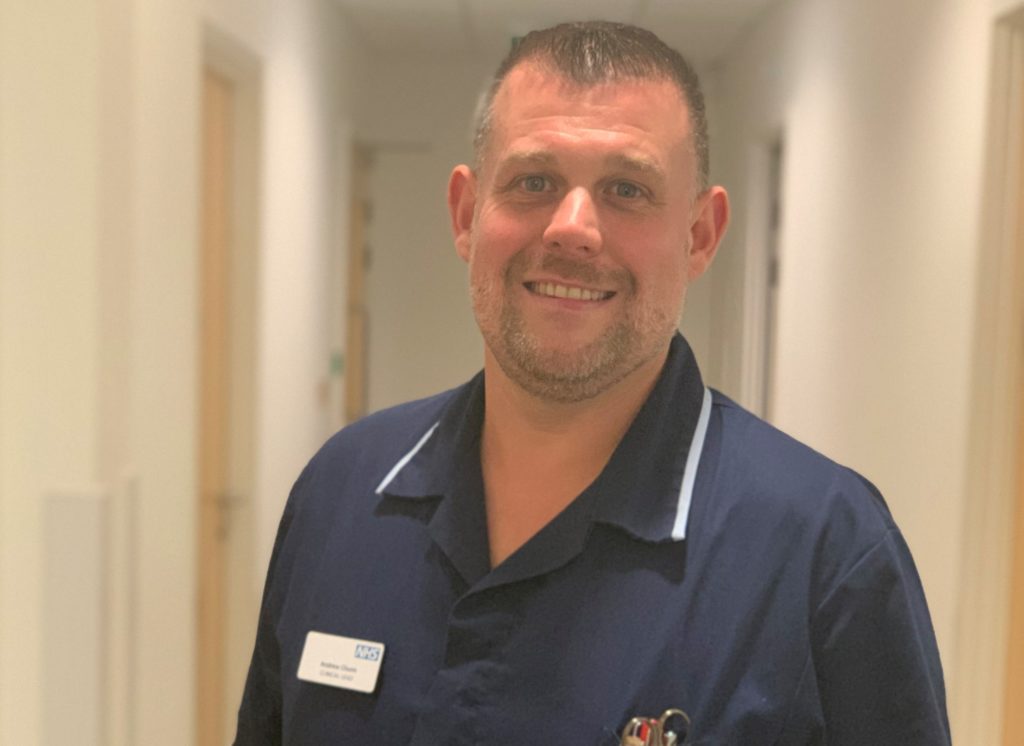 The 41-year-old from Tipton qualified as an Adult nurse in 2005 and has worked in the NHS since that time. Joining the District Nursing Service at the Trust in 2014.

“I love community nursing,” Andy says. “I was lucky enough to be given the opportunity of completing my Specialist Community Practitioner – District Nursing qualification in 2015.”

Now however, Andy has a very different title, that of ‘Practice Educator – Digital Lead’ and is responsible for providing education and support to community-based colleagues, with a focus on providing faster digital solutions to existing processes. Developing IT systems from a clinical perspective to help support and improve the quality of patient care.

“I’m also on the lookout for emerging new technologies that may be of benefit in preventing ill health and promote healthy lifestyles in the population that we serve. “ Adds Andy, but how did this all come about in the first place?

“I’ve always had a passion for health informatics and mobile working for district nurses.   When preparing for Unity I was on secondment for a year helping to set up mobile working systems within the Trust – helping to get all the existing paper systems set up into an electronic format. In doing that we found some unexpected gaps. Things like workflows, templates and other elements needed to effectively be reverse-engineered to make it suitable. It was such an undertaking it needed a new role dedicated to it – and that’s where I found myself.”

Andy’s role extends to education and training, and his dedication to improving the patient experience through technology and his development of a training package for nursing teams led to him being recognised as Digital Leader of the Year in the Trust’s annual Star Awards.

“It was incredible to be able take something that had been developed as a theoretical, academic piece of work and implement this in the real world.  Being nominated for a Star Award with SWBH is amazing.  I really can’t describe that feeling of being recognised in such a way by your peers!”

Outside of work Andy can either be found either enjoying himself playing Overwatch and other videogames with partner Ian, or in training as he tries to improve his stamina, having set himself a goal to be able to run 10KM by the year’s end – a goal he has very nearly reached. Though if you gave him half a chance he’d happily travel a lot further…  upwards.

“It’s not going to happen but I would love the opportunity to spend some time on the International Space Station.  The universe in general fascinates me.  How can time bend?”

As for his own hero, Andy immediately mentions writer, musician and comedian Victoria Wood. “Funny, intelligent and never compromised her art or writing – but I often find inspiration comes from my patients. Even in the most unpredictable, heart wrenching situations people will come out with words of courage and true wisdom. It’s incredible.”