Children’s wards refurbishments get off to a brilliant start 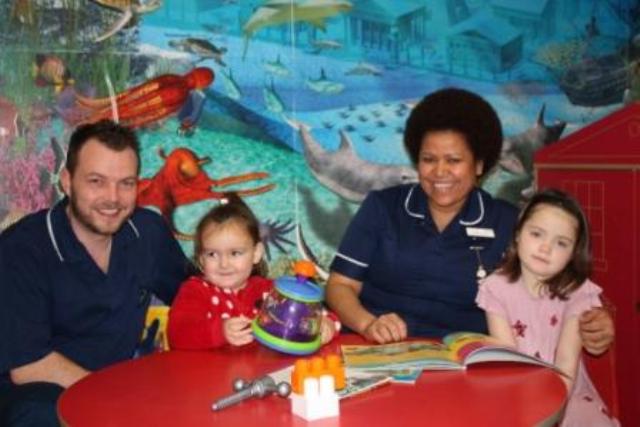 Young patients and staff on Sandwell Hospital’s children’s ward are enjoying a bright start to the year with the end of the first stage of a major refurbishment project.

Aiming to bring more light and colour into the life of children at Sandwell Hospital, as well as provide more space for patients and staff alike, the £500k project is much more than just a refurbishment. Rooms, wards, dedicated units, treatment rooms and offices have, and are being, redesigned to make the three wards not only more modern, bright, welcoming and efficient but, like a TARDIS, even more spacious.

Matron, Heather Bennett, said: “It is fab and will be brilliant when the whole project is finished. It is hard to believe what has been achieved. We are delighted and the extra space and dedicated units we can now offer, particularly when coping with winter pressures, are fantastic.”

Project Manager Paul Scott, outlined how the whole refurbishment will pan out: “There are three phases and the opening of Lyndon One was the end of the first. Now we have moved on to Lyndon Ground and that and Priory Ground will be completed by April 2012.”

When finished, the project will also provide the paediatric unit with a dedicated adolescent area for the first time. Matron Heather Bennett explained: “It will be much easier on our adolescent patients whose privacy and dignity will be enhanced by en-suite rooms, single sex toilets and their own leisure area.”

The first patient to enjoy a new room on Lyndon One was Molly Taylor, aged 8 from Wednesbury.  Molly said that she was really excited to be in the new room and added that it ‘’was great not having to go down to the corridor and use the toilet and shower.”

Paul Scott and his team were particularly pleased by the involvement of the ward staff in the planning of the new wards. He said: “Staff have been closely involved with the layout of the ward as they understand the flow of patients. On Lyndon One the front of the ward has been opened up and a main feature is an underwater mural over an area with a colourful picket fence and toys. It was important to make sure that the areas were spaced out to ensure that we had maximum use of every space.’’