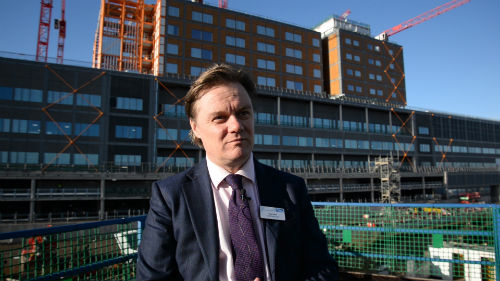 Build back on at Midland Met Hospital

The community served by Sandwell and West Birmingham NHS Trust will be pleased to hear that their long awaited new hospital the Midland Met, will once again ring to the sound of heavy machinery as the builders move back in.

The news follows the Department of Health and Social Care agreeing to provide the funds to finish the building through a publicly financed direct contract, after the collapse of Carillion in January.  Procurement for the main contract will start next month (November). The contract for interim repair to the two thirds built hospital has today been signed off by the Trust’s board, and awarded to Balfour Beatty. The company will be on site from Monday 8th October, with work due to commence by 22nd October, and work is expected to take six months.

Commenting on the decision, Chief Executive Toby Lewis said: “We are delighted to enter this partnership with Balfour Beatty to take the important next steps in completing the Midland Met.  It has been sad to see the building standing paused for the last nine months, and so it is great news that work will shortly restart.  We are grateful for the considerable support that we have had locally and nationally to move forward.  We are investing in our existing buildings for the interim period but there is no doubt that a new single acute and emergency hospital in Smethwick is what the local NHS needs to provide the very best care.  It also releases money to invest in primary care and mental health services.  This news brings that transformation closer.”

Thomas Edgcumbe, Balfour Beatty Managing Director for its North and Midlands regional business, said: “We are delighted to be able to support the Trust on this key hospital project which is vital for the local residents and the wider community.

“Our wealth of experience and expertise in the healthcare sector will enable us to recommence work quickly and allow for the successful completion of this early works contract.”

Eight months after the collapse of Carillion, and the consequent pause on construction of the new Midland Metropolitan Hospital in Smethwick, the project’s future has been secured.

The new build will be the main acute hospital for almost three quarters of a million people across north and west Birmingham and the borough of Sandwell.  Completion will unlock resources to invest more in local general practice and mental health services, and is the centrepiece of a strategy for integrated care which is at the forefront of the NHS Five Year Forward View, and anticipates the ten year plan for the NHS, due to be unveiled later in 2018.

In early August 2018, Sandwell and West Birmingham NHS Trust launched a competition to win an enabling works contract to prevent the deterioration of the construction site.  That contract is to be awarded in September.

At the same time, the Board of the Trust reversed prior decisions to proceed on a private finance model, and opted for a direct contract with a building contractor to finish the new hospital, with funds to be provided from central Government.  This proposal was submitted to the Department of Health and Social Care and to the Treasury on August 2nd.

Now Minister of State for Health, Steve Barclay MP, has confirmed the position:

“Our long term plan will see the NHS receive £20.5 billion a year more than it currently does by 2023, but our commitment does not stop there, as this important partnership shows.

“By taking this bold step, we are not only giving patients in Sandwell and west Birmingham world-class NHS facilities on their doorstep but also showing our determination to build an NHS fit for the future – all whilst making sure taxpayers’ money is spent in the best possible way”.

“This is absolutely fantastic news.  After a huge amount of work by teams across Whitehall and the Trust, and with the voices of local residents, clinicians, and stakeholders having been being clearly heard, we are delighted that we now have a definitive publicly financed plan.  We will continue to engage with the construction market over coming weeks and build towards a formal procurement by November this year.  We always said Midland Met would be delivered and the doubters were wrong.  The Prime Minister’s promise is being honoured.

“Midland Met will open in 2022, and by then our partnerships with local GPs, schools and care homes will be even deeper and more integrated than today. This is a vote of confidence in our publicly financed construction plan, and in our STP strategy as a whole.  The new hospital is about improving the outcomes of patient care and about regeneration and public health.  We need to finish the job and seize the benefits.”

Sandwell and West Birmingham Trust Board members have agreed a preferred option to finance the completion of the Midland Metropolitan Hospital through a publicly funded model.

Toby Lewis, Chief Executive, explains more about the latest development in this video:

Toby Lewis, Chief Executive, said: “The construction site for the Midland Metropolitan Hospital continues to be secure and yet all construction work remains paused until a resolution is found. It is extremely unfortunate that we are starting to see deterioration to some of the building materials and it is now clear that some work that has been completed will need to be redone. The full costs of that rework and deterioration will be fully understood this month but are expected to exceed £10m. That cost could increase if construction is not progressed before next winter.

“The likelihood of being able to open this much needed hospital in 2020 is now, regrettably, becoming unfeasible and the options to secure funding and construction arrangements that remain are more likely to see completion in 2022. There is no doubt that the hospital will open and will provide outstanding facilities locally for many generations to come. All parties involved remain committed to working together to seek a resolution to construction of the Midland Metropolitan Hospital and we welcome the support from politicians and partners at local and national level.”

Toby Lewis, Chief Executive, said: “We continue to report the position factually and straightforwardly to our Board, which helps staff and local taxpayers to know what is going on at this difficult time.  It is not in dispute that the Midland Metropolitan Hospital is needed urgently and that 2018 was the preferred date for a project which started a decade before.

“Arrangements to maintain safe services until 2020 have been developed, but some options for finishing the hospital take the opening date well past that timescale, perhaps as late as 2022, and would, in all probability, necessitate interim service reconfiguration between our sites in 2019.  This is something partners are working to avoid, but as time goes by it is becoming more probable that a slower building route will be chosen, with increased cost and disruption.

“Funders, government, politicians and local public sector bodies are working together to find a solution, but we recognise that deadlines set by all parties, in good faith, for a decision by the end of March and then the end of April have passed.  The Trust can do no more to bring the position to a conclusion in order to deliver the Prime Minister’s promise to complete the Midland Metropolitan Hospital as quickly as possible.   We are having productive discussions with regulators about additional costs to the Trust associated with delay.”

Sandwell and West Birmingham Hospitals NHS Trust this week received more and ongoing welcome support to progress the construction of the Midland Metropolitan Hospital, that was affected by the insolvency of Carillion announced in January 2018.  Clinical quality issues in urgent and emergency care, and workforce recruitment issues, drive a view that this vital new hospital, that is two-thirds built, proceeds rapidly.  This will mean that patients can receive safe, high quality care in purpose-built facilities, seven days a week.

Toby Lewis, Chief Executive, welcomed the continued support from partners. He said: “This week has demonstrated the absolute commitment from all involved to work together to get this project back on track, so that the new hospital can open in 2020. That means construction work re-starting in the spring sunshine enabling our patients to get the long-awaited new acute and emergency hospital that they deserve.

“I am pleased that so many partners are behind the project, including local MPs John Spellar and James Morris, and the West Midlands Mayor, Andy Street. The Prime Minister reiterated her commitment during PMQs on Wednesday and we are hopeful that we will get the green light to progress a solution to get the hospital completed in 2020.

“The Trust’s Board does not yet have a final view on how to finance and construct this key project.  But what is clear is that a decision point must come soon and that if at all possible we need to bring an end to site degradation, which is costing money week by week on rework.  We have published an estimate of the extra cost that private or public funders will need to meet and we are working constructively with all partners to finalise decisions.

“We are not lobbying anyone for anything, though we welcome Andy’s letter.  What we are doing is undertaking our public duty to keep local taxpayers and NHS staff informed and involved in this critical project.”
To watch Andy Street’s video about the Midland Met Hospital, go to  https://twitter.com/twitter/statuses/987010947704410114

Toby Lewis, Chief Executive of Sandwell and West Birmingham Hospitals NHS Trust, spoke on Friday, January 19,  on site at Midland Met Hospital, about the development and the current situation following the liquidation of Carillion.

Watch our video below to find out what he said:

Toby Lewis, Chief Executive, said: “It has been abundantly clear over the last 24 hours how much the completion of the Midland Met means to the plans and ambitions of partner organisations locally.  We have worked together for over a decade to develop the plans to invest more money into primary and community care, and redesign acute care.  That plan is ‘two thirds built’ with the new hospital, and partners are anxious to re-establish timescale clarity.  We are working to do just that with The Hospital Company, and now with PwC and government officials.  We welcome the commitment to project continuation offered yesterday in Parliament, which has reassured staff, working to provide NHS care here, that this overdue project remains a priority.”

Toby Lewis, Chief Executive, said: “I have spent time today on the construction site of the new Midland Metropolitan Hospital and I have had a number of discussions with key stakeholders including The Hospital Company who hold the contract for building the hospital.
“We will be working hard over the next few days and weeks to resolve any uncertainty over how this vital NHS acute hospital gets completed in 2019.”

Toby Lewis, Chief Executive, said: “We regret this morning’s announcement concerning Carillion, who are the constructor for our long awaited new hospital, which is almost complete. We are working closely with HM Treasury and The Hospital Company as alternative arrangements are put in place to ensure that the construction of the Midland Metropolitan Hospital is completed.  People working for Carillion are part of our local community and we will want to do anything that we can do to support their needs and futures at this difficult time.”