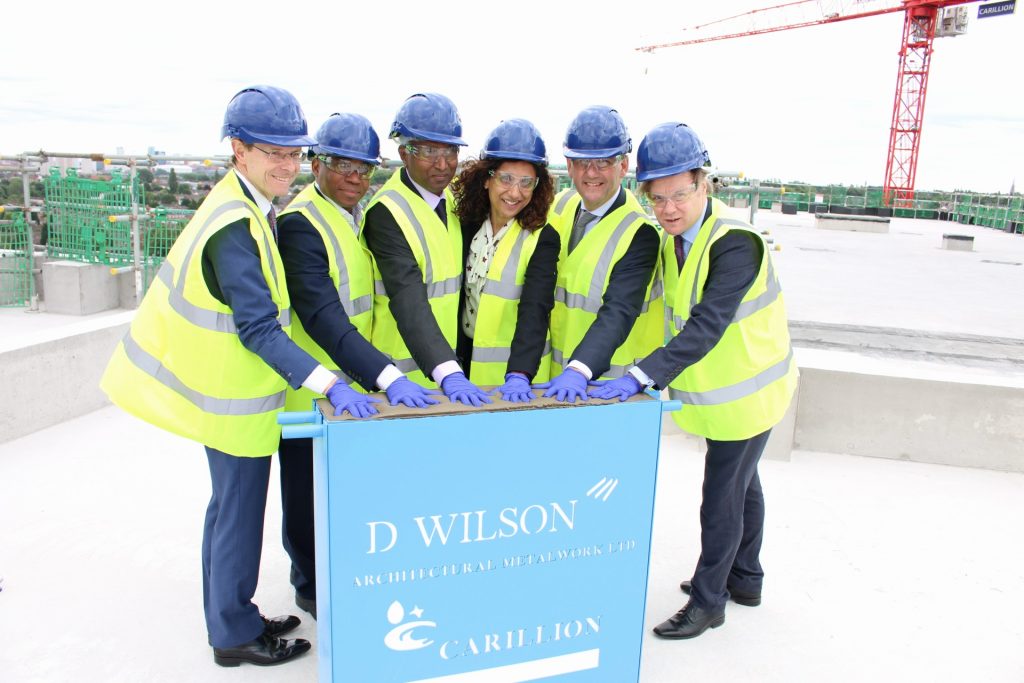 Andy Street marked the major milestone at a music-filled event which was held at the site in Cranford Street, Smethwick, which is currently under construction.
The Topping Out ceremony falls on Black Country Day and is exactly three years since the project was given funding approval from the Treasury.

During the celebration, the last piece of steel was placed on the 10th floor, the highest point of the hospital, which is being built by support services firm Carillion for Sandwell and West Birmingham Hospitals NHS Trust (SWBH). 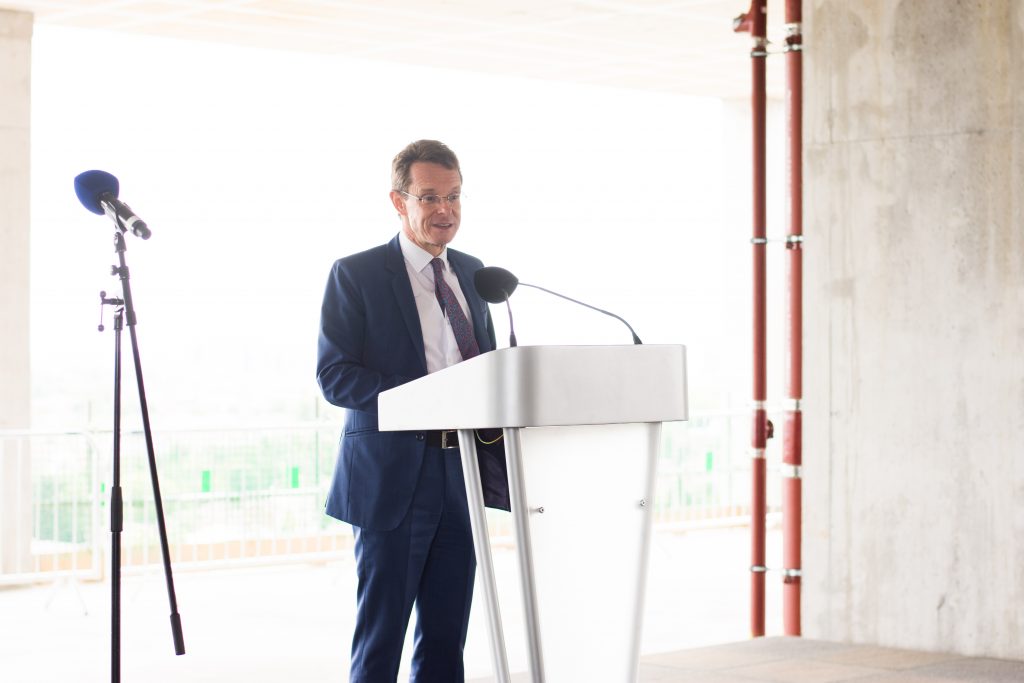 The Mayor of West Midlands speaks at the Topping Out ceremony.

This will eventually be inserted into the building alongside the plaque. The Mayor said: “It has been a pleasure to be at the Topping Out ceremony today and play a small part in what is a fantastic project which will help to drive up the quality of clinical services in Birmingham and Sandwell.

“However, this is also a major regeneration opportunity, using old industrial land and helping to act as a catalyst for the development of brownfield sites around it.

“The new hospital is also supporting local enterprises and the voluntary sector, as well as inspiring and engaging local schools. I congratulate everybody involved and look forward to seeing the finished and fully-functioning hospital.”

Chief Executive Toby Lewis added: “Today marks another definitive step towards opening our acute and emergency super centre.
“The new Midland Metropolitan Hospital will serve half a million people across Birmingham and the Black Country. Quality of care will be improved on a seven day basis. And the hospital will be a hub for community regeneration.
“We congratulate Carillion on their work with us and look forward to opening the Midland Metropolitan in Spring 2019.” 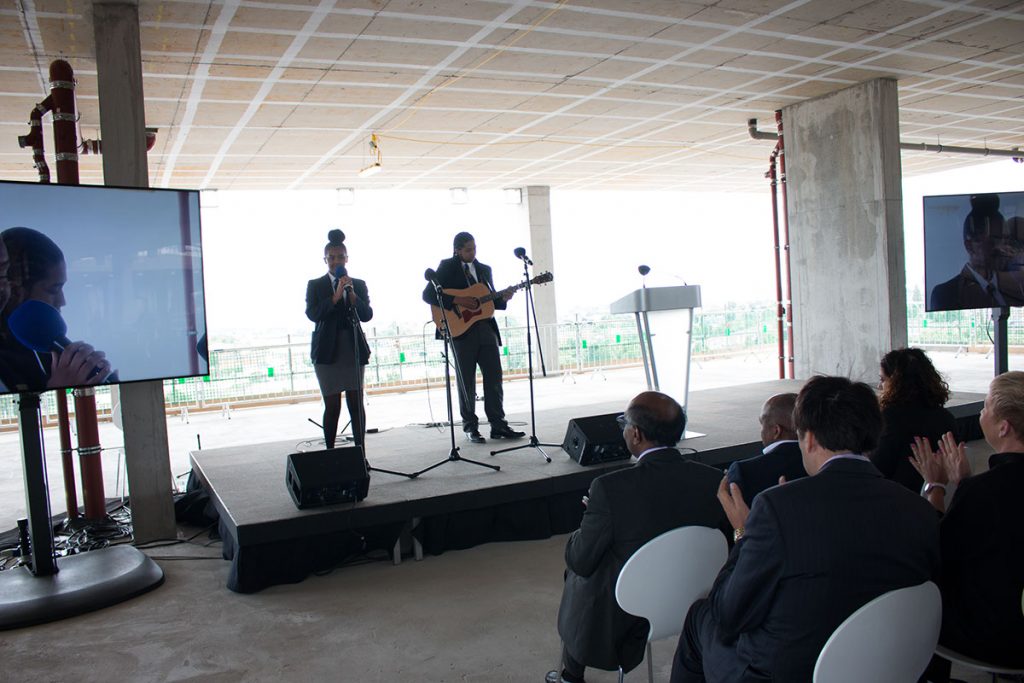 Musicians from Bristnall Hall Academy rock out at the Topping Out ceremony.

The ceremony was followed by musical performances from Bristnall Hall Academy Orchestra, The Westminster School and Dreemz Choir.

A video flythrough of the new hospital showed how it will look when it is completed. The attendees were also shown footage of various school and community visits that had taken place at the site, by students who were interested in the development.

The Treasury officially announced on July 14, in 2014, that it approved the £353 million hospital to be funded through both the public and private sector.

Since then a staggering 800 people have been employed to construct the building, and it is expected to continue to boost the economy.
David Hollywood, Carillion Project Director said: “We are delighted to be marking the Topping Out at Midland Metropolitan Hospital today.

“We are proud to be a part of this project which has already created a host of opportunities for businesses and people in the local area by providing jobs, skills, training and apprenticeships and when it is complete, will provide state-of-the-art healthcare facilities for the people of Sandwell and West Birmingham for many years to come.” 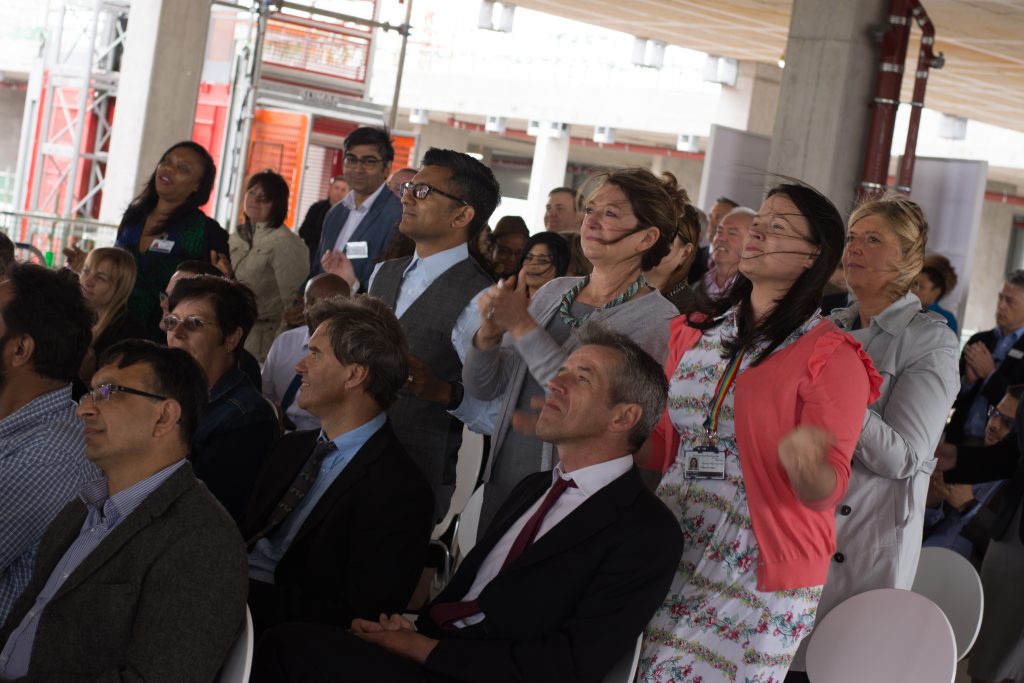 The audience enjoyed the performance from the Dreemz Choir.

The hospital will bring together acute services and boast a wealth of new technology including hi-tech diagnostic equipment.

A glass-fronted winter garden on the fifth floor, will not only be an inviting place for staff, patients and visitors to meet but it will also be the welcome and navigation centre for the hospital. Visitors will be able to find their way with the help of clear signs, volunteers and digital wayfinding. Plans also include a huge car park with underground access to wards and departments.