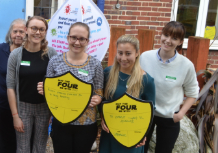 Sandwell and West Birmingham NHS Trust has kicked off its award-winning flu campaign to encourage staff to get the jab.

The vaccine provides protection against four strains of the virus as it successfully did last year.

Susanna Niblett, Occupational Health and Wellbeing Nurse Manager, is urging both clinical and non-clinical staff to join the flu fighting force and have their jab this year.

She said: “It’s important that colleagues get their flu vaccination as soon as possible as the vaccine can take up to two weeks to take full effect.

“It estimated that one in four healthcare professionals may become infected with influenza during a mild season, so having the jab can massively reduce the risks of infection. It’s important to get protected.”

The flu vaccination offers the only protection against the virus. It doesn’t cause the flu, which is one of many myths about the injection. The most common side effect can be slight bruising or localised muscular stiffness at the injection point but this soon clears up after a few days.