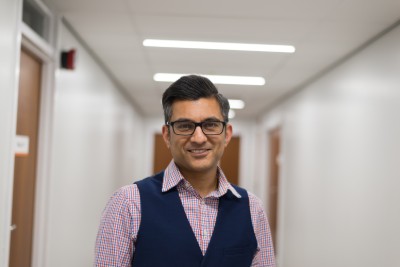 A children’s doctor will be throwing some serious shapes in a 12-hour dance-a-thon – all in the name of charity.

Dr Nick Makwana will be raising funds for Your Trust Charity, the registered charity for Sandwell and West Birmingham NHS Trust where he works, on Friday 15 November.

He’ll be performing non-stop in Sandwell Hospital’s main reception area and will be joined by staff from the Trust throughout the day including children from Sandwell Day Nursery. He’ll also be raising money for the Encephalitis Society and Children In Need – with Pudsey even making an appearance.

Nick said: “I wanted to do something for charity that was a little bit different and also highlighted the importance of regular exercise on physical and mental health for staff and patients.

“These three charities are very important. Your Trust Charity has been making a huge difference to the lives of patients and staff locally which I really wanted to support. I am also a professional panel member of the encephalitis society and I have seen first-hand the great work they do in raising awareness and supporting families affected by this devastating disease.

“And of course it’s Children In Need day so it’s a great way to recognise the work they do.”

Nick will be dancing to a variety of music spanning the decades from the 1970s to the current charts, as well as some Bollywood and African beats to reflect the diverse population the Trust serves.

He is passionate about dancing and enjoys watching all forms and genres of dance but the person he most admires for his skills is his 75-year-old dad.

“He can still give me a run for my money,” Nick laughed.

“If I wasn’t a doctor I reckon I would have been a West End choreographer and ultimately a judge on Strictly Come Dancing!”

Nick will start dancing at 7am. To sponsor him go to https://uk.virginmoneygiving.com/NickMakwana.