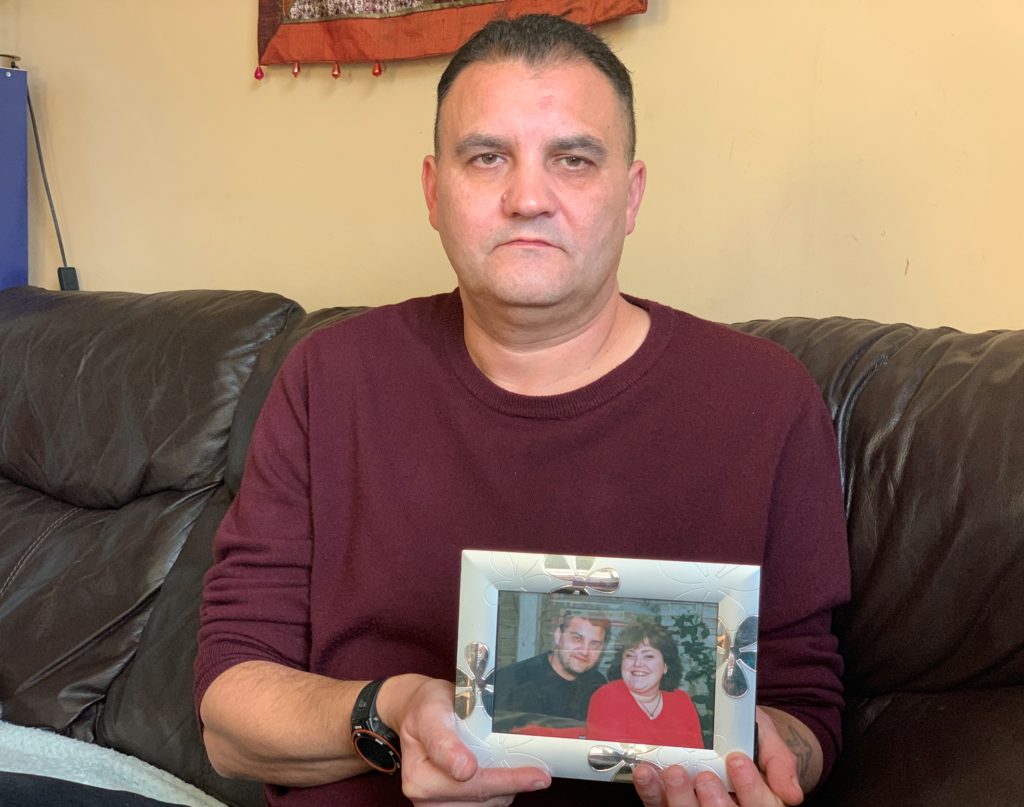 Placing the bright red poinsettia next to a photograph of his loving wife, Roger Hackley knows that this Christmas will be the hardest he’s ever experienced.

The bloom, his wife’s favourite, is a heart breaking reminder of how cruelly she was taken away from him earlier this year.

In February the mum-of-two died after being struck with flu, aged just 45.

Fighting back tears, Roger, aged 49, said: “Ruth caught the flu virus and had it over three days. She passed away on the fourth day. It’s devastating.”

Roger said he would be keeping her memory alive by buying her gifts just as he’d done every year they were together.

“This is the first Christmas with me and our two adopted boys.  Ruth loved Christmas, it was her favourite time of the year so it’s going to be incredibly hard this year.

“I have kept last year’s Christmas cards up because they’re addressed to us and the decorations that Ruth had put up.

“I have bought her a poinsettia as I bought her one every year as well as a Yankee Candle as she loved those. I’ll be lighting that for her on 24 December. I’ll try and make Christmas the best I can for the boys. Ruth will always be in my heart.”

Roger, who works as a cleaner at City Hospital, Birmingham, bravely decided to share his story, in the hope it would encourage more people to get the life-saving vaccination.

He recalled how his wife was taken ill on 28 January this year: “When Ruth started showing symptoms, she didn’t go the doctor, it was just the usual thing – taking paracetamol and lots of fluids. We didn’t realise how dangerous her condition was. Later I found her collapsed on the bathroom floor and she didn’t know who I was. I called 999 and she was rushed into hospital.

“She was transferred to critical care where she was put into a coma. She sadly suffered a cardiac arrest and I went into see her, held her hand and watched her slip away from me.

“The cause of Ruth’s death was Influenza A. It shut down her heart and her organs. There was nothing there to protect her.

“I used to say to Ruth you need to get your flu jab, there’s nothing to worry about,” added Roger, who receives his at work every year.

“I think if she had the vaccination it would have made a difference. The flu jab saves lives.”

Roger admitted adjusting to life without Ruth has been hard in lots of different ways. Coming to terms with what happened has been difficult for him. “If I’d been a bit quicker, got her to the hospital the weekend before she passed away maybe she could still be here today. Part of the story is I blame myself because I didn’t realise how bad the flu virus was.”

The couple met 20 years ago. Roger recalled: “She was a beautiful lady. She was my soulmate and my best friend.” The couple adopted two young brothers five years ago and would enjoy days out together

“As a family, we went out on day trips; we went swimming together, to the park together, shopping, holidays. Tenby, Wales was our favourite place to go with the children,” he explained.

“I wish she was still with me now. The times we had together were absolutely fantastic. I miss her every single day.”