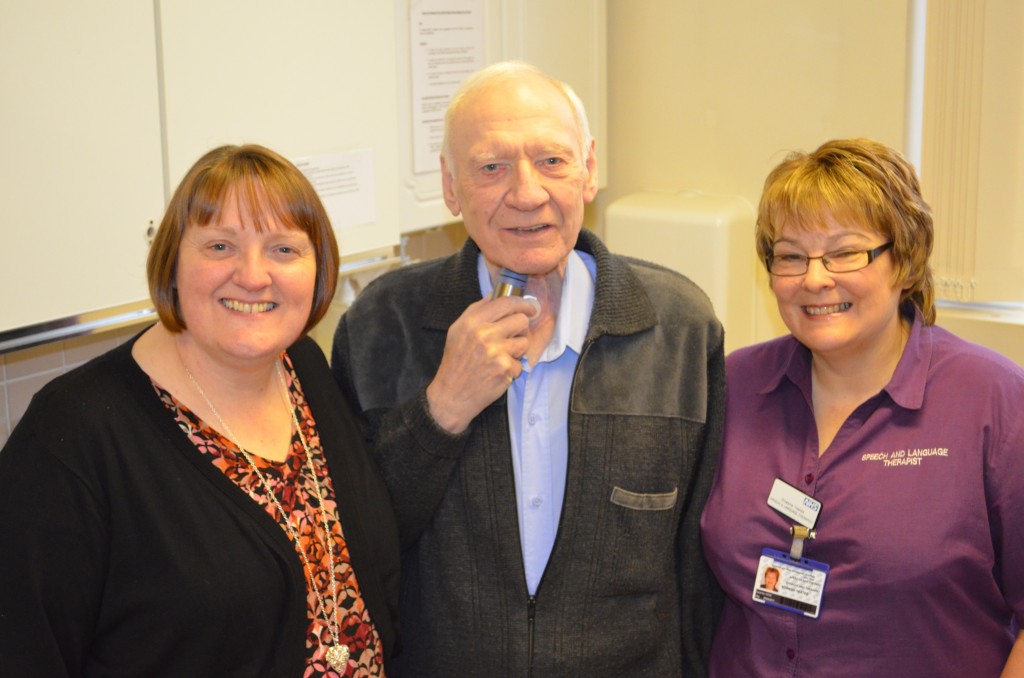 A charity donation is helping Birmingham patients who have lost their voice box following cancer treatment to talk to friends and family again.

A number of patients each year have surgery to remove their larynx (voice box) as a result of head and neck cancers. For Birmingham patients, this surgery is done at the Queen Elizabeth Hospital but patients return to Sandwell and West Birmingham Hospitals (SWBH) NHS Trust’s City Hospital for all their post-operative care.

One such patient was Bob Mason, from Winson Green, who underwent a laryngectomy operation in 2007 to remove his larynx. After the operation, many patients are fitted with a silicone valve to help speech, but unfortunately Robert was not able to go through this procedure. Communication became extremely difficult and his only options were mouthing and writing, which was frustrating for him and his family.

Bob wasn’t the only patient unable to go through the procedure, so the Speech and Language Therapy Department applied to the Get A-Head Charitable Trust for funding to purchase a set of electrolarynxes. These are devices used to produce electronic speech for those patients who have lost their voice boxes.

The devices are expensive but an award of £2,150 was donated, enabling the Speech and Language Therapy Department to buy five new electrolarynxes.

Bob – who used to work in the post room at City Hospital and for many years delivered mail to the very department which later treated him – was the first person to benefit. Both he and his daughter Mandy Mason are delighted with the difference it has made to his quality of life.

Using his electrolarynx, Bob said: “It’s given me a whole new perspective on life. I used to have to write things down, but now I can talk and even use the telephone.”

Mandy, who works in Maternity at City Hospital, said: “Dad is much more confident now he has his electrolarynx – he takes it with him everywhere. Before, he couldn’t communicate and as a family we would all get frustrated. Now he can talk to his friends, answer the phone and communicate with the consultants and other healthcare staff who are treating him, instead of me having to talk on his behalf, which is so much better.”

Rowena Yeates, Senior Speech and Language Therapist at the Trust, said: “We are extremely grateful to the Get A-Head Charitable Fund for their very generous donation. Without their generosity we wouldn’t have been able to purchase the electrolarynx that has changed Bob’s life, and the other devices that will help change the lives of other laryngectomees in the future.”