Little Stan Green, aged nine, who was being treated on Lyndon Ground ward, said it was “like a dream come true”. He added: “This is absolutely brilliant. My biggest dream has come true today meeting Rondon. He’s my favourite. And I even got my T-Shirt signed by all four who came along.” Stan’s dad Ash laughed: “I thought they would have to take Stan’s blood pressure when he saw Rondon walk in.”

The visit was organised in conjunction with the hospital’s Your Trust Charity.

Player Chris Brunt said: “It is good to come down here and give something back. We come to the hospital every year. Being in hospital isn’t the greatest place to be around Christmas, and if we can help break up the time they spend here by coming along and putting a smile on the patients’ faces then it is great. I have got young kids of my own who have been in hospital, not with anything serious, and isn’t nice. Most of the people in the area support the team and so it is nice for them to see the players here and it’s something different.”

During their visit they met with some seriously ill patients, including Loki Hudson, aged three, and Maddie Box-Poole, aged nine. 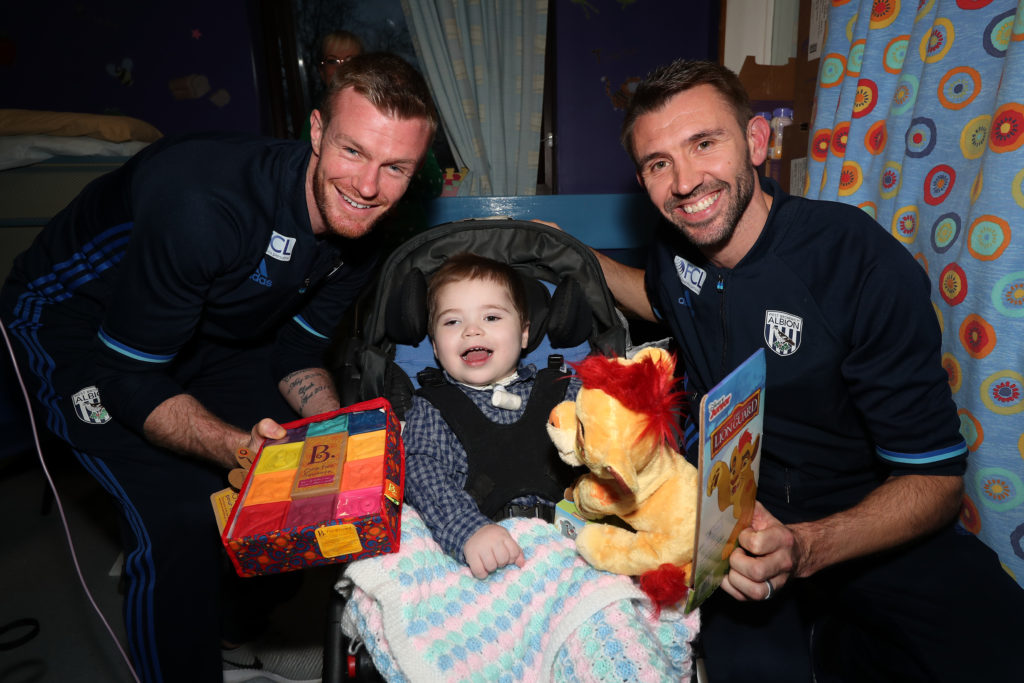 Chris, who has two boys aged eight and five, added: “It isn’t nice to see any child ill and I can only imagine what their families are going through. It makes you appreciate the staff here and how hard the patients’ families work. Being here also makes you realise how lucky you are to have healthy children.”

During the visit, the club’s charity also donated two televisions for the Children’s wards and a box full of board games and films for the day nursery.

Acting Chief Nurse Elaine Newell said: “We are always very grateful to the West Bromwich Albion Football Team for their continued generous support of our young patients at Christmastime. It is better for children to be at home for Christmas, however when they are too sick to go home at this festive time then a present from a local sporting hero goes some way to cheer them up.”