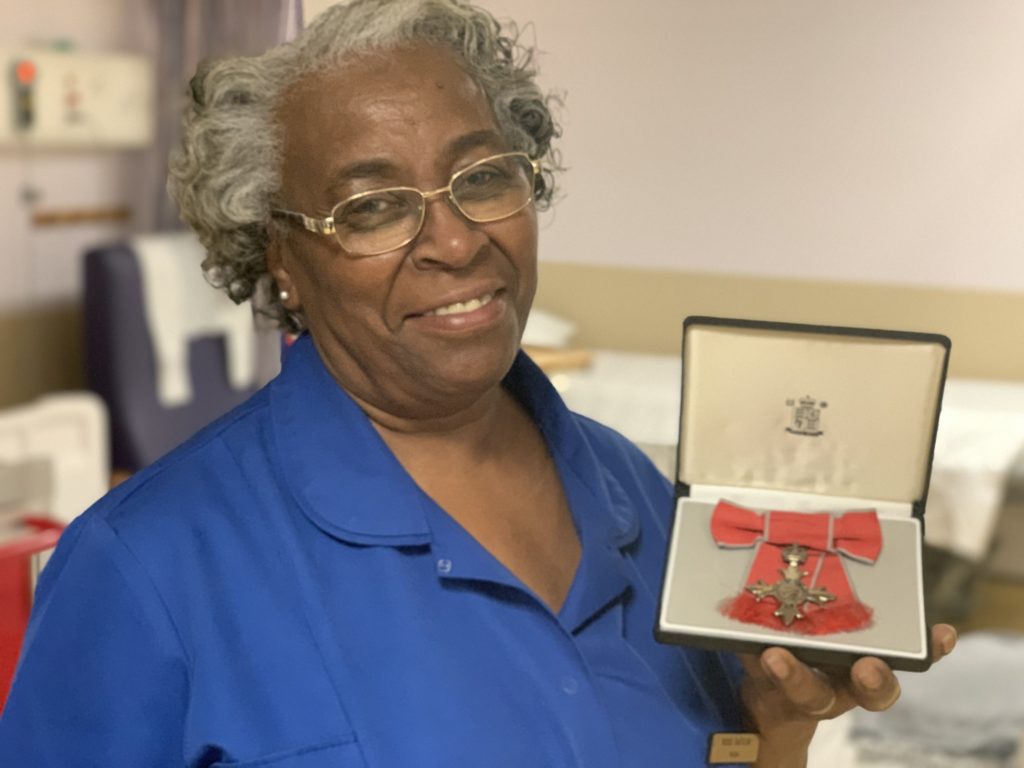 55 years and counting! Caring Rose reminisces over career as Year of the Nurse and Midwife is launched

2020 is Florence Nightingale’s bicentennial year, designated by World Health Organisation as the first ever global Year of the Nurse and Midwife. Nurses and midwives make up the largest numbers of the NHS workforce. To launch this celebration of our nurses and midwives, we shine a spotlight on Rose Butler, a well-known figure who has devoted 55 years of her life to nursing.

When Staff Nurse Rose Butler was told there was a man waiting to see her outside the ward at Sandwell Hospital she was left intrigued.
As she stepped into the corridor, his face seemed familiar and it dawned on her he was the son of a patient she had nursed a few months earlier.
Cradling a baby in his arms, he showed her the little girl and told her: “Hi I’m Terry, and this is your namesake. I brought her all the way from Newcastle so you could meet her.”

Rose remembers the moment fondly. She says: “I was so overwhelmed and honoured that Terry had named his baby after me, because of the care I had given his father when he was being treated on Lyndon 5.
“I remember Terry and his pregnant wife visiting his father. Unfortunately he died, and afterwards Terry went back up to his home in Newcastle and I never heard from them again until that day when he turned up at the hospital.

“I’ve had other people send thank you cards and one woman sends me a bunch of red roses every year on my birthday. It really brings home how much people value the care they or their loved ones receive and how important the role of a nurse is.”

Having a child named after her is just one of the highlights of Rose’s 55 year career. She also has received another honour – an MBE, awarded to her in 2008.
“I remember when I was travelling to Buckingham Palace, I had butterflies in my stomach,” recalls Rose. “I couldn’t eat anything on the day because I was so nervous.
“It wasn’t the first time I had been to the Palace – I’d been invited to a Garden Party previously and met the Queen and Prince Philip which was equally as nerve-wracking but also amazing.
“When I received my MBE from Prince Charles, he asked me how long I had been nursing, and whether I enjoyed the job.
“It was a very special experience.”

Rose’s began her career in nursing in 1965. She joined the State Enroled Nursing programme at the West Bromwich and District General Hospital, and 18 months later she qualified.
Pauline Werhun, Chief Nurse at the time, recognised she had a special quality when it came to caring and pushed her forward into becoming a State Registered Nurse.
“Before I joined the course, I wanted to be a teacher, but I guess I was inspired to be a nurse by my cousin. Strangely enough when I was at school in my native Jamaica, the teachers nicknamed me nurse, so I was destined to be just that.”

Rose has seen many changes over the years, including the merging of West Bromwich and District Hospital, with Hallam Hospital and Heath Lane, which finally became the Sandwell Hospital we all know today in the 1970s.
“I remember the excitement around the opening of Sandwell  Hospital,” adds Rose.
“When we walked in, we noticed there were lifts and we were amazed. Our old building didn’t have any. We would have to escort porters who carried patients up the stairs.
“I can safely say that nursing has definitely changed over the years. It used to be very strict and our uniform consisted of a cap, an apron and a belt. I still wear my belt today. Of course there are the advances in technology and the move to using computer systems instead of recording information in one book.”

But one thing hasn’t changed for Rose: “Nursing is a real pleasure and it always will be. I know I can do something that will help the patient and it makes me feel very happy and satisfied.
“I want to make sure I deliver the best care possible and every morning when I come into work – that is my main aim.”

Over the years Rose, who is a mum-of-two, has only left the profession twice and very briefly. Shortly after she married she moved to London with her husband. But within a year, they came back to her hometown of Smethwick, with Rose returning to the District Hospital to pick up where she left off.

Five years ago, Rose decided to retire. But again, within a year, she was back at Sandwell Hospital, working in the imaging department as a staff nurse, where she continues to care for patients today.

“I don’t know when I will retire,” she adds. “I do love my job. I’ve done it for 55 years so it’ll be really hard to imagine doing anything else. I think recognising nurses and midwives is a fabulous thing to do. It’s a difficult role, but to have this support throughout the NHS is really special.”