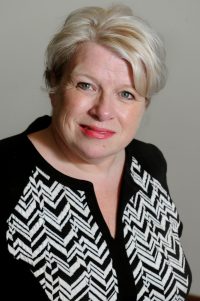 Lesley joined our Trust in March 2020, after retiring as Chief Executive of Dudley and Walsall Mental Health Partnership. She previously served at Black Country Partnership NHS Foundation Trust as Director of Operations and Deputy CEO.

She had joined Black Country Partnership NHS Foundation Trust in 2011 from Wolverhampton PCT where she had been Director of Mental Health since 2006.  Prior to this Lesley was Director of Primary Care and Children’s Services.

She started her NHS career as a registered general nurse at Sandwell District Hospital.  After qualifying as a registered sick children’s nurse she then worked at Birmingham Children’s Hospital occupying a range of specialist roles in children’s oncology services before moving into general management in late 1990 where she was General Manager.

Lesley has had a successful record in managing a range of complex health services and has spent the majority of her career leading operational delivery and numerous transformation and service redesign programmes across a range of acute, community and primary care settings.

Lesley is also an STP Senior Responsible Officer for MH Work Streams and is a former Trustee for Age UK.