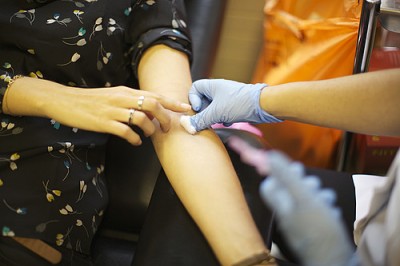 In the wake of a government report published today (21 November), which has found that more than a fifth of people living with HIV are unaware that they are infected, sexual health services in Sandwell are urging people to get tested – even if they think they are not at risk.

According to the Public Health England report, released ahead of National HIV Testing Week (22 November to 29 November), 22% of people who are HIV positive are unaware of their infection and need to be tested. The report also reveals that around half (47%) of the 6,360 people newly diagnosed with HIV in 2012 were identified late.

People can come along to the Dartmouth Clinic, based at West Bromwich’s Sandwell Hospital, Mondays – Fridays for a free and confidential HIV test. There is no need for lengthy discussion about the test, and it just involves having a blood sample taken. Free condoms are also available.

Jayne Saunders, HIV Clinical Nurse Specialist at Dartmouth Clinic, said: “Anyone who is having sex can get a sexually transmitted infection, such as HIV, and should have a check up; it only takes one occasion to pick up an infection. Like many other sexually transmitted infections, HIV does not cause any symptoms until complications begin, so you should be tested even if you do not have any symptoms.

“Early HIV diagnosis and timely treatment can nowadays mean a near-normal lifespan. This is why National HIV Testing Week is so important, raising awareness of the benefits of testing and encouraging everyone, especially those most at risk, to get tested.”

The report recommends that those most at risk of catching HIV – men who have sex with men and Black-African men and women – should get tested now and continue to get a regular HIV and STI screen if having unprotected sex with new or casual partners. However, anyone who is sexually active is at risk and is urged to get tested and always use a condom.

Jayne continued: “People who are unaware of their infection are likely to be those most at risk of transmitting HIV to others. While men who are having sex with men and Black Africans are the most at risk group, today’s report showed that 45% of HIV diagnoses in 2012 were due to heterosexual transmission, so always use a condom correctly and come in for a test, even if it is to give you peace of mind.”