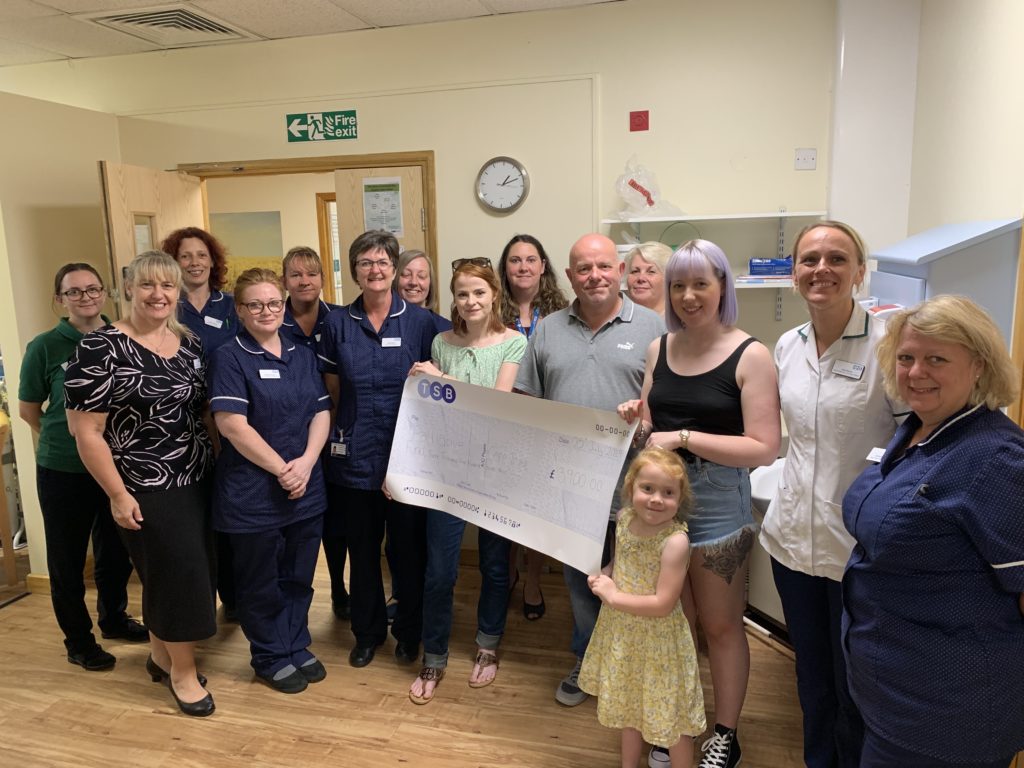 Remembering Julie Harris: A Family’s Thanks

A loving husband and father led his family in praise of a West Midlands healthcare Trust’s Palliative Care department at a special lunch in memory of his late wife – a former employee of the organisation.

Malcolm Harris, his daughters and granddaughter attended the get together at Rowley Regis Hospital to celebrate wife Julie, and present former colleagues and helpers in attendance with a cheque for £3,900, raised in Julie’s name.

Julie, 54, had worked in Domestic Services at Sandwell and West Birmingham NHS Trust for 24 years and only left in June of 2018 when forced to due to her illness. Julie was diagnosed with breast cancer in 2005, but despite undergoing various treatments for her illness sadly passed away last August.

Since that time, the Harris family has rallied together and hosted a charity night to raise money in support of the Connected Palliative Care Team, in gratitude for the team’s care and compassion to not just Julie but the family as a whole throughout the final months of Julie’s life.

Malcolm told the gathering in Rowley Regis Hospital’s Heart of Sandwell Day Hospice: “Julie was a beautiful woman, sorely missed. She would have appreciated this today. Because the team put so much into caring for Julie. The care that Julie received from the Palliative Care team was marvellous. We felt it was right to give something back, so we’re trying to remember her as she would want to be remembered.”

Funds were raised with a charity night, spearheaded by Malcolm, Julie’s two daughters and Malcolm’s future son-in-law who was a part of the band that performed. Sales from the tickets went towards the fund and the family hopes to repeat the show next year, again for the benefit of the Connected Palliative Care service. With the donation going towards a series of improvement works at the Day Hospice, including the addition of a counselling room and an extra therapy room, as well as updates to facilities like the kitchen and garden areas, all of which will benefit other patients in the years ahead.

Sue Law, Palliative Team Leader said: “We really want to thank Malcolm and his family today for the fundraising they have done. At one of the most difficult times of their lives they have spent their time fundraising for us, and we are very, very grateful for that. I can’t tell you how overwhelmed we are as a team that people like Malcolm and his family would do that for us.”