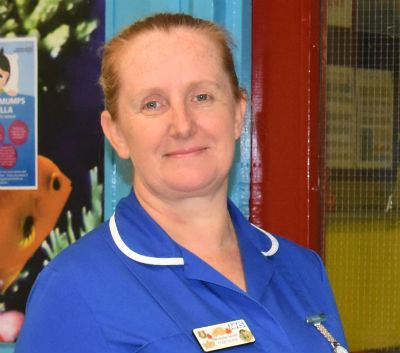 NHS Hero: Quick-thinking Michelle Smith has proven she’s ready to treat patients day or night – and even 30,000ft in the air.

For the paediatric nurse, who works at Sandwell and West Birmingham NHS Trust, found herself doing just that when she was on her way back from a dream trip to Hawaii.

Passenger Michelle, 46, heard a call out over the tannoy from the air steward for a medically trained passenger and after heading to the front of the plane, found a woman being violently sick.

She had been suffering from dangerous diabetic ketoacidosis (DKA) and the mum was quick to put her nursing skills into practice.

“It quickly became apparent that she was a diabetic and the airport had taken her insulin off her at check in, so she didn’t have it to hand. She told me that her last blood sugar reading was 22 – which I knew immediately wasn’t good – a normal reading should be between four and seven and anything between 10 and 15 would require quick treatment.”

At the point, an A&E doctor had also come to the front of the plane and established that the lady was in diabetic ketoacidosis – which can be life-threatening if not treated quickly. The doctor was able to put in a cannula and give her some anti-sickness medication (both of which were in the plane’s medical bag) after which Michelle, who is based at Sandwell Hospital, attached a bag of fluids.

“There were no drip stands or extension leads as you would normally have in a hospital,” said Michelle. “I had to just hold the bag up whilst it ran through – we couldn’t calculate a drip rate either – we just knew she needed them urgently.”

The pilot had organised an emergency landing in Toronto, so when the fluids were finished Michelle and the doctor made their way back to their seats for landing and the lady was then taken off the plane by medics.

Once they were back in the air, the cabin crew invited Michelle to spend the rest of the flight in first class and took some details from her. A few weeks later she received an e-mail from British Airways, thanking her for what she had done and giving her a free return flight to any European destination of her choice.

“I was shocked to receive the e-mail,” said Michelle.

“We really had to just think on our feet and do what we could with the limited supplies we had.”

When Michelle isn’t saving lives up in the air, she works on the paediatric wards treating young patients. She began working at the Trust six years ago and is dedicated to her job.

The mum-of-two and dedicated grandmum, said: “From as far back as I can remember, I’ve always wanted to look after people, especially children. Seeing youngsters walking out of our hospital well again, really gives me great job satisfaction.

“It’s knowing that you have made a difference to that patient’s care. My daughter, who was on the flight with me, is now following in my footsteps and is working as a Healthcare Assistant.”

So who is Michelle’s hero? “It has to be my dad Michael. My mum was a working mum, bringing us up after my parents divorced. But we were so proud of the determination of my dad who wanted to see us as often as he could, even though he was working a lot. He never wanted to let us down.”