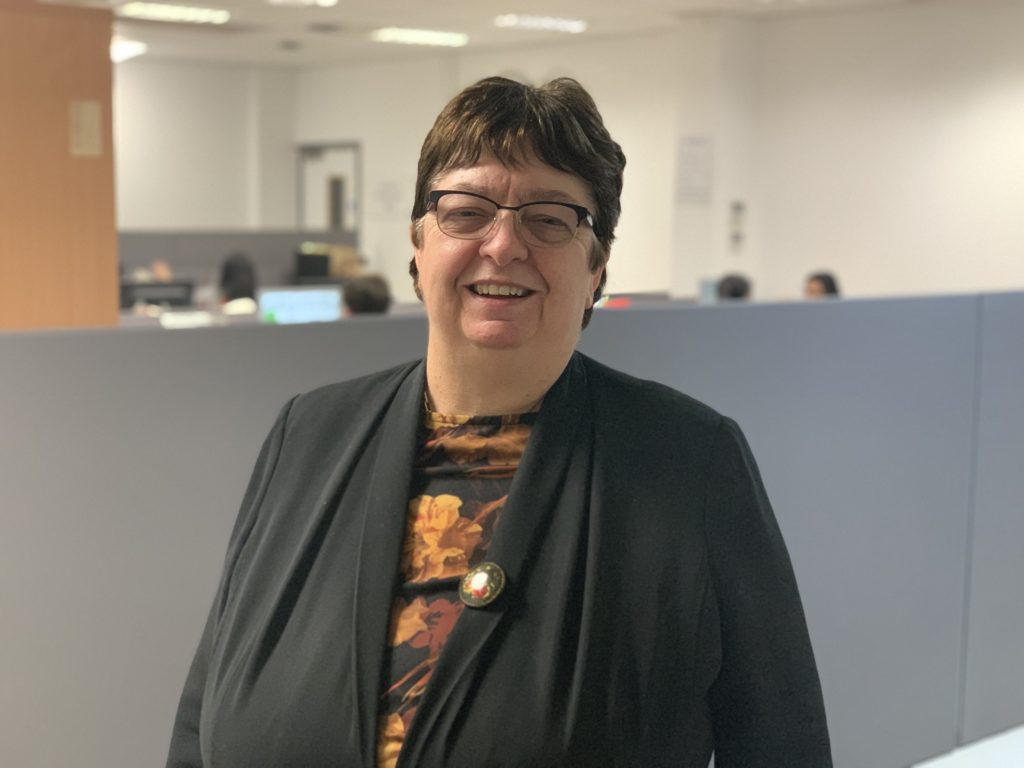 “There was an earthquake that day,” laughed the leading clinician, who was awarded an MBE in the New Year Honours List.

“The desk started shaking and there was this rumbling noise. At first I thought someone was moving furniture around, but then we all discovered there had been this earthquake.”

And Professor Hughes, a Consultant in Chemical Pathology and Metabolic Medicine, has been shaking things up ever since, by bringing in a wealth of new ideas – all to improve patient care.

Her role involves monitoring bodily fluids like blood and urine to detect important changes in the body’s chemistry. Metabolic medicine is concerned primarily with the clinical management of disorders, such as cardiovascular disease, diabetes and lipid (fat/hormone) disorders.

“I was the first to take clinics analysing bloods into the community,” she explained. “It was hugely beneficial because we were taking the care directly to our patients, rather than them having to trek to the hospital.

“I had an interest in patients with genetic disorders and so became the first to start up research into this as well as managing their conditions.

“Our research in lipids became one of the foremost in the UK.”

Professor Hughes didn’t stop there. She saw how the Asian community suffered with cardiovascular diseases and at the end of the 1990s she started research into this area.

She added: “There was a very high incidence of diabetes in people in the area and so we started offering a screening service outside of the research

“We were checking bloods for diabetes, and high cholesterol and we found that many of the community had issues around this.

“My team became embedded into the community and were visiting temples, mosques and even West Bromwich Albion FC, and engaging with those hard to reach groups.

“After they were diagnosed a nurse or doctor would give them lifestyle advice and arrange further treatment. We found that over 50 per cent were at risk of a cardiovascular disease. Sandwell was then 40 per cent above the national average of those at risk of a heart attack.

“The results were astonishing. In total we screened more than 8,000 people over 10 years.” As a result she set up the charity Healthy Hearts, to carry on the good work in educating the community as a whole about the risks around cardiovascular diseases.

Over the years, Professor Hughes has been commended for her research but she has also been recognised for the work she has done in the education of junior doctors.  Her work led to the Sandwell site becoming a teaching facility.

As with her work around cardiovascular diseases, Professor Hughes has continued her passion within education and is  now Deputy Medical Director of Health Education England having risen through the ranks, on a part-time basis.

It’s surprising to learn that despite her hectic career, she still has various hobbies she indulges in out of work.
“I am a long distance swimmer, I sing in a choir and I also enjoy floristry,” said the Professor, who cites Florence Nightingale as one of her own heroes.

And speaking of her recent honour – the MBE – awarded for services healthcare, education and training, both nationally and in the West Midlands, she said: “I was absolutely amazed when I found out back in November. The envelope arrived, and when I opened it, I couldn’t believe it. I just kept looking at the letter.”