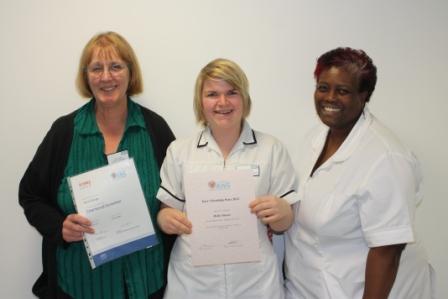 Two Neurophysiologists from City Hospital are amongst the first in the country to be awarded Chartered Scientist status by the Science Council.

To become recognised as Chartered Scientists, Consultant Healthcare Scientist Anne Burge and Clinical Physiologist Evadne Cookson, underwent a demanding assessment of their work by the Association of Neurophysiological Scientists.

This evaluation proved that both Anne and Evadne are working to the same academic standard as Chartered Scientists in other fields.

“The award acknowledges their expertise and reflects the high standard of care available to patients in the Trust’s Neurophysiology department.”

Anne and Evadne received their awards at the Association of Neurophysiological Scientists’ annual general meeting at Crewe Hall last week.

Anne said: “It is amazing to be the first from my profession to become a Chartered Scientist.

“Being recognised by the Science Council reassures our patients and local GPs that the treatment we provide in the Neurophysiology department is of a high professional and scientific standard.”

Hollie received the award for the outstanding portfolio of work she has produced during her placement at City Hospital.