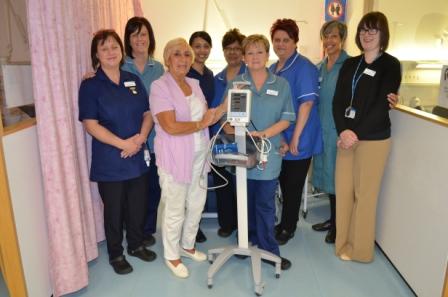 Grace Leahy recently visited the Birmingham Treatment Centre at City Hospital to see the difference that her fantastic fundraising efforts have made to supporting cancer patients in the region. Grace held a series of events including cake sales, raffles and tombolas to generate the £2,000 she donated to the SWBH Charity.

“The chemotherapy unit offers a one stop service for cancer patients enabling them to have tests and treatment in one day. The extra monitor we’ve been able to purchase from Grace’s fundraising efforts has made us even more efficient in the care we provide to patients”

Grace was accompanied on a tour around the unit and got the chance to meet some of the patients benefiting from her hard work. She said:

“It is my pleasure to support the SWBH Charity and the chemotherapy unit. I have been fundraising for charities for over twenty years and I enjoy supporting SWBH because I can really see the difference it makes. It’s so rewarding to tell people who’ve generously donated exactly how their money has been used.”

The SWBH Charity supports Sandwell and West Birmingham Hospitals NHS Trust to fund additional facilities that enhance the experience of patients and their families. If you want to know more about supporting the charity’s campaigns, contact the fundraising team on 0121 507 5196 or email swbh.fundraising@nhs.net