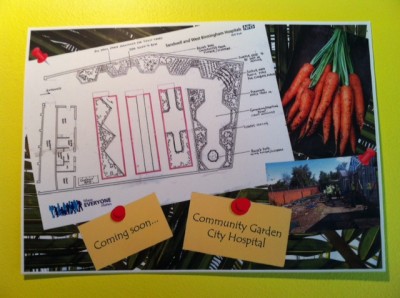 A project to revive and restore a long neglected garden area, complete with greenhouses, took a step closer to launch recently with the input of a grant from Sandwell and West Birmingham Hospitals Trust Charity Fund.

Last year local people and staff at City Hospital in Winson Green came together for the first day of clearance and conservation at the hospital’s run down green house and garden site. The ‘Soho Urban Roots’ group, which is running the project, aims to bring together local residents, hospital staff and other community groups by re-using the previously derelict site near the Dudley Road to grow fresh fruit, vegetables and flowers and providing an opportunity for gardening exercise and possibly horticultural training.

Anne O’Leary, Sandwell and West Birmingham Hospital Trust, Deputy Divisional General Manager and Chair of Soho Urban Roots, said: “The last clearance day was full of laughter and energy. Everyone worked very hard to clear the space and a huge amount was achieved in one day by the staff and local residents working together.”

She added: “Now we have the funding for some more fundamental clearance so we will be bringing in professionals for a few days to clear areas of concrete and broken walls.”

The plan is to clear a space in the walled garden area so that the team can design and plant a new garden and access the remaining two large greenhouses. It is hoped the space could be used to plant and produce fruit and vegetables for sale at its on-site shop and possibly at the local ‘24 Carrots Food Market’ as well as provide a green and pleasant space.

Eric Brown, Head Gardener at City Hospital explained: “The walled garden holds a lot of good memories for me. I remember the people who helped build it the first time round, many who are still here and some who have gone. When it is reopened and successful, I shall be very glad indeed.”

The garden has been given a five year lease by the Hospital Trust, as well as the £15,000 charity grant, but will rely heavily on the involvement of local residents to make it sustainable in the long run.

Anne O’Leary added that interest of Princes’ Trust Ambassadors who would like to recruit and start up a horticultural training programme was also very hopeful for the long term future of the project.

Anyone interested in getting involved with Soho Urban Roots should contact Anne O’Leary on anne.oleary@nhs.net or Tel: 0121 554 3801 Ext 4087.