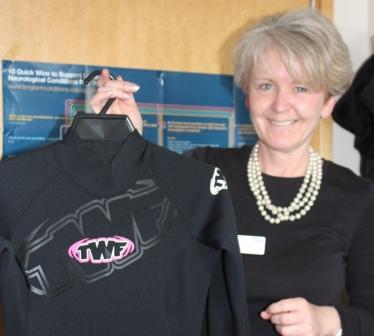 A Multiple Sclerosis (MS) Nurse from City Hospital is taking on the challenge of the Great North Swim in Windermere as part of the MS Society’s Challenge60.

Dawn Brookfield has also persuaded her sister Carly to take part in the event on Saturday 15 June and they’ll be doing the one mile swim in memory of two of Dawn’s patients. They’re hoping to raise at least £1,500.

Dawn Brookfield, who’s 49, says two of her former SWBH patients inspired her to take on the challenge: “Simon Arrowsmith was an absolute joy and an inspiring chap. He was a highflying lawyer and was diagnosed with MS in his early 50s, just after he got married. He wasn’t just a patient to me. He had rapidly progressing MS and is sadly missed.

“I also lost another lady, Diane Morgan, early this year. She had an aggressive form of cancer, as well as MS. She was very inspirational and never said “why me?” They have both left a big hole in my life.”

Dawn says that taking on such challenges, gives her a “tiny insight” into what it’s like to have MS. She said: “After the Great London swim last year, my limbs wouldn’t stop shaking and my movement was restricted by the ultra tight wetsuit. But I only had to put up with it for an hour; my patients have to deal with the symptoms on a daily basis.”

Dawn is also persuading colleagues at Sandwell and West Birmingham Hospitals to support her by bribing them with her tasty baking, The Great North Swim is the biggest open water swim in the UK. Over 10,000 people take part in the event at Lake Windermere in the Lake District.

If you would like to support the MS Society, via Dawn’s efforts, you can go to

http://www.justgiving.com/tiggerlicious and can sign up to take part in Challenge 60 at www.challenge60.org.uk.