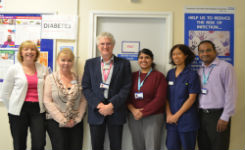 OVERWEIGHT PATIENTS slimming down several dress sizes in a matter of weeks, diabetic patients drastically reducing their blood sugar levels and inactive people rediscovering their stamina and reinvigorating their sports and social life – it sounds like a work of fiction, but is very much the case for patients who have been undergoing a clinical trial run by the diabetes research team at Sandwell and West Birmingham Hospitals NHS Trust.

The Trust has announced the results as a major breakthrough in global diabetes research. The study has revealed that a combined treatment of temporary intestinal bypass with a device and diabetes medication has proved more effective than either conventional treatment or the device alone in helping patients control their diabetes.

The two year multi-centre study, called ‘REVISE Diabesity’, is funded by the Association of British Clinical Diabetologists (ABCD), and run by the diabetes research team at SWBH since 2014. After year one, this world-first study proved that a combined treatment of using the Endobarrier device and liraglutide drug (a non-insulin once daily injection helping to lower blood sugar levels) can bring tremendous results to patients.

The clinical trial participants who received the combined treatment lost on average over 12kg within a year and their sugar levels dropped such that their measure of diabetes control fell from a very poor level to a much better level. Many participants, who previously were obese are now enjoying a more active and healthy life. Losing weight and bringing down their blood sugar levels has also meant that patients have a potentially reduced risk of life-threatening conditions, such as heart attack or stroke. For some patients, the positive results started to be seen within a week after receiving the treatment.

Support Worker Corinne Karim (44) from Birmingham, said: “Just a week after I started the treatment, many of my friends noticed that I had started to lose weight. I managed to continue to lose two pounds per week. I was obese before I started, but just after a year of treatment, my BMI is normal now. I feel so energetic and I can take part in so many more activities with the children and adults that I work with.”

The research has opened up great opportunities for patients like Corinne, who do not respond to conventional treatments. Dr Piya Sen Gupta, one of the clinical leads of the REVISE Diabesity Study, said: “We know that a majority of patients with diabetes do not respond well to enforced diets in the long term, that 75% of patients fail to respond to certain diabetes drugs sufficiently and that surgery is quite a radical option. The results of the REVISE-Diabesity Study show that combining this device and drug is very effective in just 1 year and offers promise to patients with diabetes in terms of a new treatment option.”

She continued: “Treatment with the device itself is not as invasive as surgery. It involves the insertion of an Endobarrier device – a 2 foot open-ended, thin and flexible plastic tube – non-surgically through the mouth (by endoscopy). The device lines the upper small intestine to prevent food digestion. The device is simple to remove after a year and can be removed earlier if necessary. Our endoscopy specialists have been trained to carry out this procedure.”

Gastroenterology consultant and Clinical Director for Scheduled Care at SWBH, Mark Anderson, has been trained to perform the procedure, he said: “This study is a true example of a joint team approach and we are delighted to have the opportunity to participate in this study. It is rewarding to be with the participants at the beginning and end of the study to see the difference the treatment has made to their lives. Many of them are so much healthier and active. We hope they can carry on with healthier eating habits after their Endobarrier is removed. Although the procedure can be technically challenging, we believe that a lot of endoscopy units in the country can have their clinical staff trained to provide the service.”

The study was initiated by Dr Bob Ryder, Diabetes consultant at Sandwell and West Birmingham Hospitals NHS Trust. He is also the primary investigator overseeing the study. He said: “Without Endobarrier treatment, most of these patients would either have received insulin treatment or, if they were already on that treatment, an increase in the insulin doses.  The trouble with that usual treatment approach is that it tends to increase weight further which is counter-intuitive in patients who are already obese.  With the Endobarrier treatment they not only get a big improvement in their diabetes, but they also lose a considerable amount of weight.  And they generally feel much better in themselves – fitter and happier and for a doctor it is very rewarding to meet them and hear their individual stories of how much better they feel. All our NHS hospitals have endoscopy units and skilled endoscopists so potentially this treatment could become widely available relatively easily”.

Positive clinical results are not the only benefits that participants experienced, their self-esteem and confidence also grew during and after the treatment. Mr Pharhani (52) from Birmingham, finished his treatment three weeks ago. He commented: “Before the treatment, my diabetes was out of control. My weight was around 146 kgs, my cholesterol was really high, and it was easy for me to run out of breath after going for a walk. I had to go to shops where they sell large size clothes. After having the Endobarrier inserted and taking the medicine, my weight has drastically reduced and now I can go to normal shops to buy regular size clothes. It actually helps a lot with my self-image. I have started playing badminton and have become more socially confident with people around me. I feel like this treatment has changed my life completely. The Endobarrier, in a way, acted like a driving instructor when it re-educated me about the way I ate. I do not choose take-out food anymore and feel more energetic than ever. My brother, who is also obese, saw what happened to me and he wanted to have the same treatment as well.”

The Chief Executive at Sandwell and West Birmingham Hospitals NHS Trust, Toby Lewis, added:” This research is changing the lives of individuals and enabling them to take back control of their lives.  It is something we are proud to be at the forefront of in Sandwell and in Birmingham. The NHS urgently needs innovation and here we think we have an important new service.  We hope this research provides a basis for expanding and developing the service for people across our region and the country.”

The next step of the research will be to observe how patients continue managing their conditions after having the Endobarrier removed and reducing their medication. The research team hopes to see patients will continue leading a healthy lifestyle and be able to manage their weight and conditions successfully. After two years, the study hopes that the results could encourage NICE (UK’s National Institute of Clinical Excellence) to consider adopting this treatment so that it is available to all NHS patients who need it. Certainly, there are now several endoscopists skilled in carrying out Endobarrier procedures in the UK as a result of this study in London, Birmingham and in Glasgow.