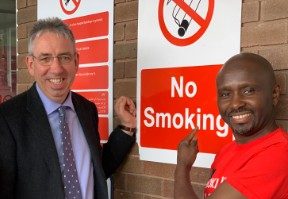 England’s head of Public Health today (Monday 9 September) hailed a West Midlands NHS Trust “as an exemplar” for its campaign to ban smoking from hospital grounds.

He spoke to staff at Sandwell Hospital, in West Bromwich, about the campaign which was launched on 5 July, during a whistlestop tour of the site.

The Trust has introduced a £50 fine for anyone caught lighting up and has employed smoking wardens to patrol the grounds.  Two vaping shops have also opened up – one at Sandwell, and the other at City Hospital, which is also run by the Trust.

Mr Selbie said:  “I visited the hospital to learn about how the Trust has gone smokefree and will pass this on to other NHS organisations. It’s such a powerful thing to see and it’s going to make the biggest difference to people’s health. Smoking is still the biggest killer and today alone in this country, 220 people will die early because they smoke.

“I have also heard how the wards are giving people support through nicotine replacement therapy and also e-cigarettes, which for a smoker is a sensible alternative choice.  The way the Trust is approaching this is an exemplar – there is something here for everyone within the NHS to learn from.”

He added: “As a hospital chief executive in my previous life we put a lot of effort into this, but we never quite succeeded, because we didn’t go at it with every possible thought and involvement from every member of staff. Here, that is what they are doing. There are posters and big signs but there are also people here to help or point you in the right direction – and this is the secret to their success that we all need to take on board. If you want to learn how to be smokefree come here and see how it can be done.”

Dr Arvind Rajasekaran, Respiratory Consultant, added: “It is an honour to welcome Mr Selbie to our Trust.  He has been able to see first-hand how well our smoking ban has worked and speak to some of those people who have benefitted from it being introduced.

“Since the ban, we have heard some fantastic stories from members of staff who have quit smoking because of the ban and this has brought them tremendous health benefits.

“The Smokefree initiative is one step in our bigger campaign of ensuring clean air for patients, staff and visitors. To paraphrase what Mr Selbie said, we wouldn’t drink dirty water so why should we accept to breathe in polluted air.”

He told him: “The windows within the waiting area in our children’s ward had to be kept closed because smokers would congregate outside the building. However since the ban, they have been able to open them without worrying about young patients breathing secondhand smoke.”