Staff across the diabetes service at Sandwell and West Birmingham Hospitals were sad to mark the end of an era with the retirement of beloved fundraiser Edna Evans.

Edna popped in to the diabetes clinic at City hospital to hand over her last collection of £47.50, before she headed off to celebrate Christmas and start her new life living with her daughter in Berkshire. But she was not going to get away without a proper celebration of her life’s work, as kind staff made their own presentation back to her.

Diabetes Consultant and Clinical Lead Dr Parijat De said: “It is indeed a testament to the sheer dedication and perseverance of an amazing lady who has been going strong despite her age and struggles to devote herself to the cause of diabetes and raise money for research week in and week out.”

While colleague Dr Bob Ryder who is renowned for ground breaking diabetes research added: “Without the dedication of people like Edna we would not be able to make the life changing advances that we do in this Trust. Research saves lives and enables us as clinicians to make breakthroughs to directly help patients.

“To give an idea of the scale of Edna’s achievements, since she started this work at Dudley Road Hospital in 1980 she has raised £22,000 all in small amounts, which is an incredible testament to the strength of her will.”

Such was the impact Edna made on those around her even retired consultant Dr Ken Taylor returned to wish her well and thank her for her mammoth contribution to help fund vital research into diabetes.

He explained: “Edna has been the most wonderful volunteer and suppor 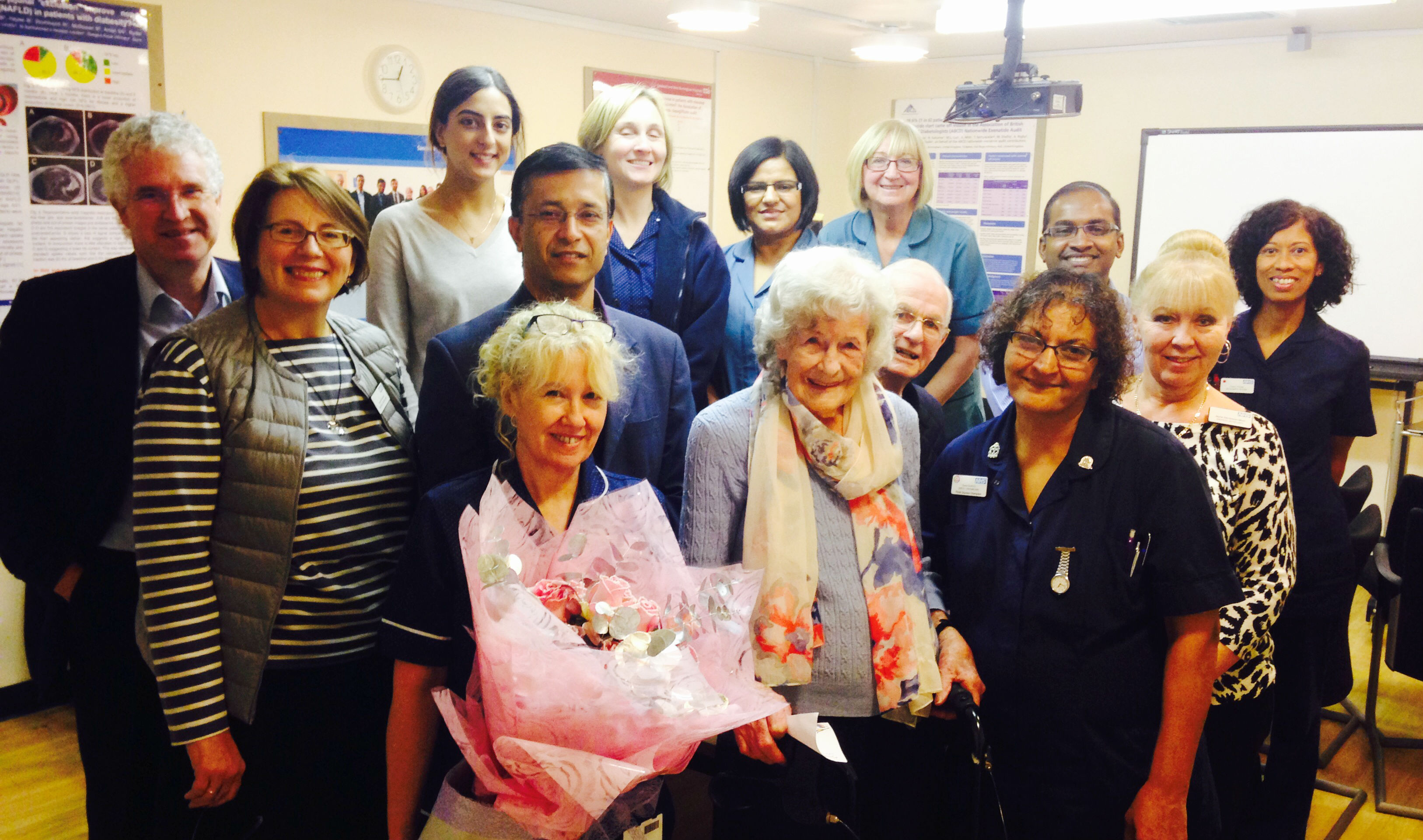 ter of the volunteer service in Birmingham. She has given over 50 years’ service, initially at the General Hospital before moving to City Hospital. She has raised thousands of pounds for diabetes research locally and for Diabetes UK nationally.

Pete Shorrick Midlands Regional Head Diabetes UK added:  “We would like to acknowledge the tireless hard work and commitment Edna has devoted to raising diabetes awareness, and the enormous amounts of fundraising she has undertaken for well over 50 years. As a volunteer and Chairman, Edna has been, and remains, an inspiration to many people with diabetes and their carers.

“Edna was the heartbeat and driving force of the Local Birmingham Diabetes UK Group for countless years. Whilst ensuring the Local Group was thriving and sustained, Edna was instrumental in delivering numerous awareness days, fundraising activities, developing fantastic healthcare professional relationships, and helping and supporting the thousands of people with diabetes across Birmingham. Edna’s dedication to improving the knowledge and lives of others as a volunteer is unsurpassed. Thank you Edna, from everyone at Diabetes UK.”

To find out more about the research activities of the Diabetes department at SWBH NHS Trust please look at the Trust’s website: www.swbh.nhs.uk