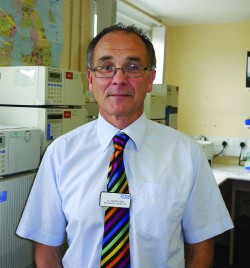 Jonathan is a relatively well known clinical scientist nationally. He is currently the SWBH NHS Trust Pathology Director and also head of Clinical Biochemistry. His career started with a PhD studying liver disease in pub landladies in innercity Birmingham. He worked at East Birmingham Hospital and New Cross, Wolverhampton before coming to Sandwell Hospital. In 2003 he moved as Head of Department to City Hospital.

As well as a career as a Consultant Clinical Biochemist Jonathan has published several books of photography of modern Birmingham including “Positively Birmingham”. Jonathan also runs the Trust’s cycling to work scheme.

Back to Consultant Directory ﻿