Fraud happens when someone does something dishonestly in order to make a gain for
themselves or another or cause a loss to another. According to the Fraud Act 2006 it is not necessary to prove a person has been deceived. The focus is on the individual’s dishonest behaviour and intent – and just trying to do it, even if not successful, makes the act complete.

Example – not declaring previous criminal convictions on an application form

S.4 Abuse of a position of trust

Example – manipulating statistics to achieve a target, creating a post for a family member

s.6 Possession of articles intended for use in fraud

Example – having a false passport

BRIBERY IN THE NHS

The Bribery Act reforms the criminal law to provide a new, modern and comprehensive scheme of bribery offences that will enables courts and prosecutors to respond more effectively to bribery committed within the UK or abroad.  The Bribery Act applies to all individuals living in and corporates (irrespective as to what happens to any profit) based or operating in the UK.

Bribery is generally defined as giving someone a financial or other advantage to encourage that person to perform their functions or activities improperly or to reward that person for having already done so.   It is, therefore, offering an incentive to someone to do something which they wouldn’t normally do.  For example, someone offering a job might be offered tickets to an event by one of the candidates or someone linked to them.

In the context of the Bribery Act 2010, the offence of bribery refers to accepting, as well as offering, a bribe.  The three offences most relevant to the NHS are:

Section 2 – Requesting, agreeing to receive or accepting a bribe to perform a function or activity improperly.

Section 7 – Failure of a commercial organisation to prevent bribery (the corporate offence).

Erin Sims and Sophie Coster are the Trust’s LCFS’ and they can be contacted using the details below:

What should I do if I suspect fraud?

If you are suspicious or have concerns:

DO tell your LCFS immediately by email or phone – your confidentiality will be respected. We never divulge the name of an informant.

DO contact NHS Protect’s National Fraud and Corruption Line on 0800 028 40 60 or via the online reporting form.

DO keep or copy any document that arouses your suspicions.

DO NOT confront the individual with your suspicions.

DO NOT convey your suspicions to anyone other than those with proper authority to investigate. 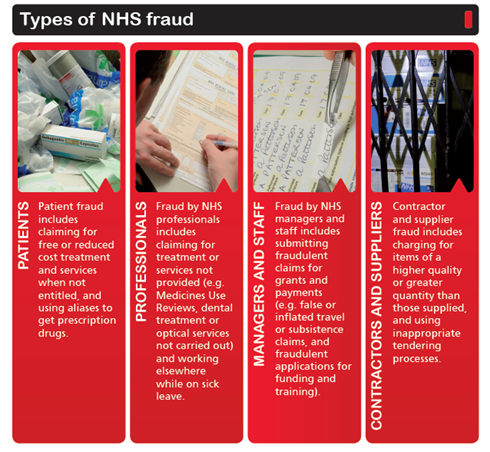